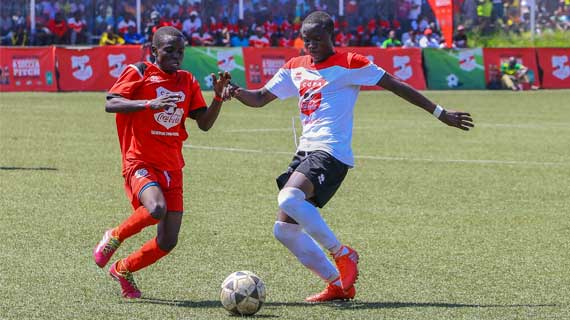 Mombasa’s Serani Boys High School clinched their first ever national school games title after coming out tops in the Copa Coca-Cola Under-16 championship, hitting Koyonzo from Western region 1-0 in the final at the Moi Stadium in Kisumu on Saturday.

Noelle Iruko had drawn Maeni level on the hour mark after Edna Nanda had given Wiyeta the lead, but Karemana tapped the winner just six minutes after Maeni had drawn level.

In the boys’ final, Serani finished the tournament unbeaten, replicating the 1-0 result against Koyonzo from the group stages.

Juma Mwinyikai hit the winner eight minutes from time with a low shot from the right in the second half.  Serani started well and had an early chance in the third minute when Mohammed Sufii picked out Mwinyikai with a good ball behind the defense, but he lobbed the ball just over the keeper.

Koyonzo had a chance in the 24th minute when Fred Okutoyi tried an effort from distance from a Juma Allan cross, but he didn’t find the target.

Douglas Odanga had another chance for Koyonzo off a poorly defended ball, but he lifted his shot from the edge of the area over the bar. In the second half, Isaac Simiyu’s header from a Clinton Obonyo corner went over in what was their first effort on target.

Eight minutes from time, Serani who had been on the receiving end of pressure from Koyonzo scored what would be the winner, Mohammed Mahir sending Mwinyikai through and the former making no mistake with only the keeper to beat.

Even before the celebrations died down, Koyonzo almost made an immediate response when Okutoyi landed on a loose ball at the edge of the box, but Said Linson blocked off the line.