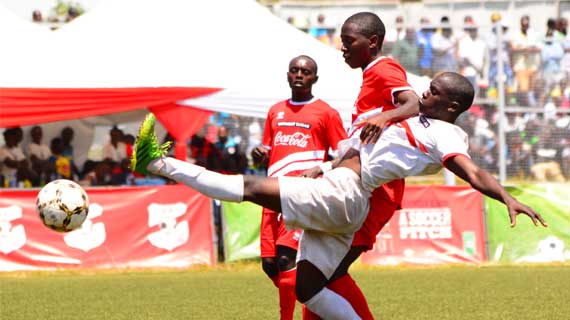 In the lottery, Dagoretti will only have themselves to blame after throwing away a good advantage. They were tied at 2-2 with Dagoretti taking the final of the five. Lorren James stepped forward and only needed to score to earn Dagoretti the trophy, but he saw his kick saved by St. Anthony’s keeper Daniel Wambua.

Heading into sudden death, Wodrine Okoth and Geoffrey Onjuati scored the first two for St. Anthony’s with William John and Mwinyi Mohammed responding for Dagoretti. Heading into the third kick, Cedric Muchina scored for the Saints, but skipper Boniface ‘Marcelo’ Mwangemi hit his effort wide, handing the boys from Kitale the victory.

It was not the first time the Nairobi region champions were throwing away the advantage. The Solidarity Boys had missed the first two through Christopher Raila and keeper Daniel Wamalwa, both of which were saved.

Dagoretti scored their first through Simon Omondi with Derrick Omondi missing the second. Daniel Musamali for the Saints and Paul Odhiambo for Dagoretti both scored the third kicks. Kennedy Kyalo then missed the fourth for the Saints and Zablon Kutela only needed to score for Dago to give them an advantage. However, he missed.

In regulation time, it was a game of two halves with Dago commanding the first while the Solidarity Boys commanded the second. However, not could breach the other’s goal-lines with the Saints defense line marshaled by Harambee Stars Under-17 hard man Christopher Raila remaining tight.

The two will however represent Kenya in the East Africa School Games set for Arusha later this month.