St. Anthony to take on Dagoretti in Finals 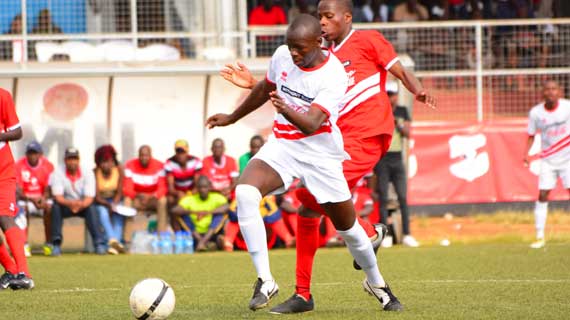 Nairobi’s Dagoretti High School will take on Rift Valley’s St. Anthony’s Boys Kitale in the final of the National Secondary School Term 2B games on Saturday at the Moi Stadium in Kisumu. Dagoretti finished off their tie in regulation time beating last year’s finalists Olbolosat 3-1.

However, St. Antony’s were made to work by Vihiga’s Ebwali before they prevailed 6-5 on post match penalties after a barren stalemate in regulation time. The Saints had a chance to finish off the game in 90 minutes when they earned a penalty in the dying minutes of the game but missed.

Dagoretti will be fresher heading into Saturday’s final having played the early kick off and avoided the tedious task of an extra 30 minutes.

They broke the deadlock just three minutes into the game when Paul Odhiambo made the most on a defensive error before picking up the ball inside the box and shooting past keeper Arnold Robert. Odhiambo thought he had grabbed his second of the morning when he tapped in from inside the six yard area but the goal was disallowed for offside.

On the restart, even before Dagoretti could finish complaining and Odhiambo still jogging back from the far end where he had gone to celebrate, Olbolosat equalized. Adan Rashid tapped the ball beyond keeper Jospher Okello to draw his side level.

But, the never say die Dagoretti kept their fight and got back into the lead in the 22nd minute through Kariobangi Sharks bound midfielder Derrick Omondi who picked up the ball at the edge of the box, set himself up with the first touch and blasted the ball into the net with the second.

Dagoretti keeper Jospher made a decent save to keep his side in the game in the 37th minute when he made himself big infront of Philip Leshan to block his effort one on one. Four minutes later, Ian Kiprotich had a chance for Olbolosat when he landed the ball unmarked at the edge of the box but his shot was over.

The contention grew in the second half with Olbolosat pushing for an equalizer and Dagoretti looking to preserve their lead and also looking for a third to cushion them. They got that vital goal 15 minutes from time to kill off the game when Simon Omondi’s shot from distance beat the keeper.

Meanwhile in the girls final, home side Nyakach Girls will take on Itigo Girls. Nyakach beat Arch Bishop Njenga 2-0 courtesy of a brace from Mercy Akoth while Itigo blasted Njambini 3-0. Harambee Starlets youngster Martha Amunyolete sealed the win with the third goal after Vicky Korir and Daisy Jerop had scored early in the second half.