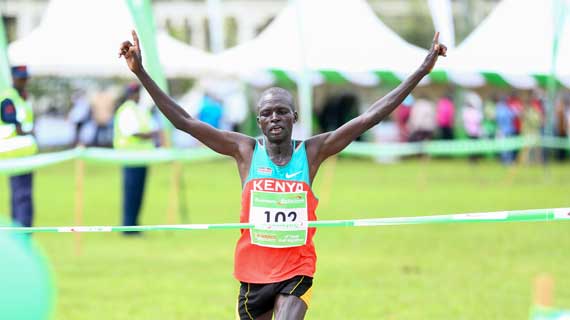 Peter Toroitich from Pokot County beat Triple Deaflympics champion and world record holder in the 5,000m Simon Kibai Cherono to be crowned the winner of this year’s 4th Edition of the Deaf Half Marathon held at the Meru National Polytechnic.

Toroitich who came in third in the 3rd Edition held in Bomet County last year was well poised to take the bragging rights as he stayed in the leading pack for the first 6km leading a strong team of contenders that included Simon Kibai, Daniel Kiptum, David Njeru and Martin Gachie.

During the race, Simon Kubai overtook Toroitich at the 10km mark but Toroitich was determined to dethrone the champion. He outsprinted the rest and at one point he was alone racing to the finish line.

Speaking after finishing the race, Peter Toroitich  said “Today’s race was very important for me and I believe for the rest of the athletes here as it will help us to prepare for the National Deaflympic trials scheduled to take place later this month. I have hope that I will be selected to represent the country in the upcoming deaf champions next month”, he said.

The annual event also included the10Km races for both men and women where Lucas Wanjiru won in the men’s category while Naibin Mushitoi won in the women category.

The race which is now in its fourth year also serves as platform opportunity to scout for athletes who will participate in the National Deaf Athletics Championships slated for 23rd and 24th May 2017 in Uasin Gishu.

Title sponsor Safaricom returns to the race for the fourth year, matching last year’s Ksh.5 million sponsorship again this year. As the race has gained more prominence within the DAAK calendar, Safaricom has gradually increased its sponsorship from the Ksh.2 million support given in the race’s first year.

The Safaricom Deaf Half Marathon is the first of 11 races under the 2017 edition of Safaricom Athletics Series.