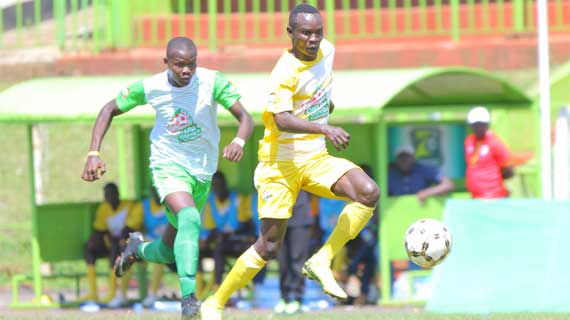 While Laiser were 2-0 winners over Uasin Gishu’s Tumkas, Kapenguria were forced to work harder before beating a hard fighting White Rhino from Narok County 2-1 and book a slot in the grand finale on Sunday at the Kericho Green Stadium.

Season One national champions Kapenguria Heroes will take on Kajiado’s Laiser Hill Academy in the boys’ final of the Chapa Dimba Na Safaricom Rift Valley Region on Sunday after both sides waded through their semi-final fixtures unscathed.

While Laiser were 2-0 winners over Uasin Gishu’s Tumkas, Kapenguria were forced to work harder before beating a hard fighting White Rhino from Narok County 2-1 and book a slot in the grand finale on Sunday at the Kericho Green Stadium.

Kapenguria failed to live up to their expectations last year, missing out on a place in the regionals. However, they have shown a step up this season and their hard working nature sailed them into the finale.

Wesley Mtai scored the winner for Kapenguria just three minutes after the break, a lead they held on till the final whistle. Tyson Kapchanga had drawn White Rhino level in the 32nd minute after Alfred Tanui broke the deadlock on the quarter hour mark.

The midfielder raced onto the ball from a swift counter attack, broke into the box before side footing the ball into the bottom left.

The flamboyant and colourful midfielder should have doubled the tally in the 27th minute but he headed inches wide unmarked from a Gilbert Deko cross. Unbowed by the early pressure, White Rhino, who are based in the Narok South Division of Ololung’a kept the fight.

The pressure and never say die attitude bore fruit in the 32nd minute when Kapchanga struck a beautiful shot into the roof of the net after picking up a cross from the left.

White Rhino had the advantage swung in their favour and they played with more confidence.

Their confidence was almost nipped in the bud six minutes to the break when Kapenguria had a chance, Deko’s freekick from the right being pushed to the bar by the keeper while Fredrick Krop’s attempt with a shot off the rebound was saved by the astute custodian.

On the turn, Rhinos should have gored their way ahead, but Kata struck his shot against the side netting after some silky piece of skill earned him good shooting space from a tight angle.

But in the second half, Kapenguria sought to settle matters early and they did so three minutes after the restart via Mtai’s bouncing header from the edge of the six yard box.

Kapenguria were on the ascendancy and almost snatched a third but were denied by the woodwork when Pkiech’s header off a Tanui corner crushed against the crossbar.

Rhino piled the pressure as they sought a way back, but were not clinical infront of goal.

In the first semi, goals in either half from Stephen Owino and Timothy Ouma saw Laiser Hill beat last year’s finalists Tumkas 2-0.

The Ongata Rongai boys were dominant in the tie and they should have been ahead earlier after just two minutes but Ian Nyasani tapped the ball wide from close range off Lameck Mogusu’s pass.

Nyasani had another chance with a header off Owino’s corner being pushed to the bar by the keeper. They continued with their glaring misses, this time, Peter Loishorua taping the ball wide with a gaping goalmouth from Owino’s cross.

In the second half, it was same gear same pace for Laiser and it took them just five minutes to double their tally, Ouma curling a brilliant freekick into the top left corner from distance.