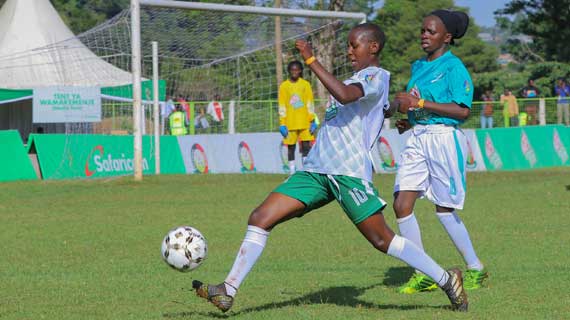 Wiyeta were in totally destructive form, thrashing Bomet Queens a record 17-0 to sail to the final where they tackle Itigo who beat Achievers Queens 6-0.

Having conquered the national school games nine times and the East Africa version six times, Wiyeta Girls will look to translate their form into the Chapa Dimba Na Safaricom tournament when they take on Itigo in the girls’ final on Sunday in Kericho.

Wiyeta were in totally destructive form, thrashing Bomet Queens a record 17-0 to sail to the final where they tackle Itigo who beat Achievers Queens 6-0.

Coach Edgar Manyara says they will be in to give their best on Sunday with their eyes on the national title.

“We have not played the regionals before and this time we want to go back home with the trophy. We know Itigo very well because we have played so many times in the school games and we know what to do to win,” the tactician said.

In their annihilating mood, Dorine Aujat and Shayline Opisa scored five goals each, Musilivi Diana scored a hattrick while Harambee Starlets Under-20 star Jecinta Karemana and Edina Wanda scored a brace each.

Aujat broke the deadlock with a low finish in the ninth minute from inside the box before adding a second four minutes later in similar fashion. On the quarter hour mark, Karemana scored the first of her three when she reacted fastest to a spilled ball from keeper Farida Chepchumba.

Wiyeta continued their dominance and they went 5-0 up three minutes to the break with Opisa scoring with a thunderous left foot shot that rattled the underside of the bar before dropping across the line.

Straight from the restart, Wiyeta were on number six when Wanda ran into a long ball after they won the ball before finishing low past the custodian.

Just a minute into the second half, Wiyeta were on cloud seven.  Aujat scored her third of the afternoon with a shot from range that somehow found its way below the keeper’s arms.

Six minutes later, Wanda added another with a simple tap in before Aujat completed her hattrick. Opisa scored the 10th in the 59th before Diana Musilivi added a quick second in the 64th and 66th minutes.

They were not done yet as Aijat added the 13th and Opisa scored three within four minutes. Musivili completed the rout with a last minute goal.