Isiolo down Chuka to be crowned Chapa Dimba Eastern Queens 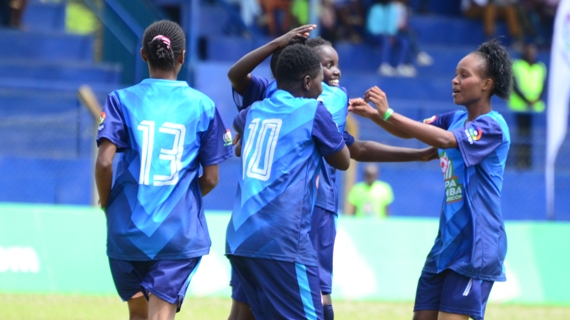 Isiolo Starlets are the new Chapa Dimba na Safaricom Eastern Region champions after coming from a goal down to beat Chuka University 3-2 in Machakos on Sunday. Isiolo who had thrashed Mabuuu Queens 8-0 in Saturday’s semis showed determination as they clawed back to clinch the title.

Chuka’s prolific striker Susan Wanjeri scored a goal in either side of Isiolo’s three, with Hilda Wanjiku scoring a double for Isiolo in the second half after Halakhe Guyate had given Isiolo an equalizer in the 33rd minute.

Wanjeri who had scored a brace yesterday as Chuka progressed to the final with a 2-1 victory over former champions Ngakaa broke the deadlock just after three minutes.

But that lead didn’t last long as Isiolo, eight goal winners from day one, went back straight level after piling in the pressure, Guyate finding the back of the net.

Isiolo rode their luck and hard work in the second half as they just needed 13 minutes to get into a comfortable lead. Wanjiku made it 2-1 nine minutes after the restart with a well taken shot from the right.

A blunder from Chuka keeper Lavendar Akoth gifted Isiolo their second goal after she was dispossessed off the ball at the edge of the box, Wanjiku simply slotting the ball into an empty net.

But, just immediately after restart, Wanjeri scored her second of the afternoon when she struck the ball straight from the middle with the Isiolo keeper and defense still celebrating their goal.

She should have completed her hattrick few minutes later when she took a good turn at the edge of the box but her shot went just wide. Despite increased efforts to try and get an equalizer, Isiolo defended well to ensure they guarded the victory till the final whistle.