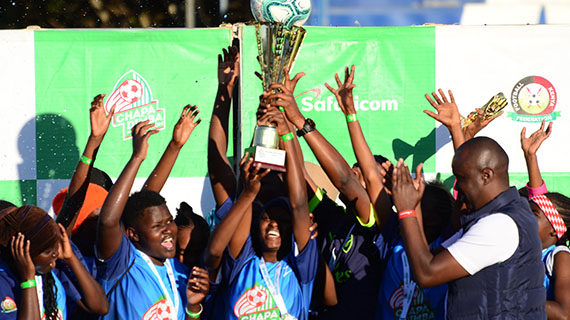 Yassin completed his hattrick four minutes after the break, rounding the keeper to tap into an empty net when he ran onto a defense splitting pass from Muthui.

Yassin had scored five by himself on Saturday as they thrashed Biashara United 7-0 in the semis and his hattrick in the final earned him the golden boot as well as the tournament’s most valuable player crown.

Tumaini have now earned a place in the national finals while also winning a cash reward of Sh200,0000.

The goal poacher broke the deadlock just after four minutes when he ran behind the defense to meet an Ian Wafula freekick and flick a header beyond Black Panthers keeper Kelvin Githui.

They came close to a second minutes later when Petros Muthui took on a long range shot was well saved by the keeper for a corner. They however made it 2-0 after 19 minutes when another intelligent run from Mohamed saw him pick on a cross from the right before controlling it calmly and slotting beyond the keeper.

Yassin completed his hattrick four minutes after the break, rounding the keeper to tap into an empty net when he ran onto a defense splitting pass from Muthui.

Panthers however gave a fight despite going down and had a chance when Dennis Murithi broke through on goal but his shot flew over the bar. They however got a reprieve with quarter of an hour left when Enow Abdulmalik’s volley from the edge of the area looped over the keeper.

But, it was Tumaini who would move the game beyond reach, Moses Kapirante scoring with a low shot with just a minute of regulation time left.