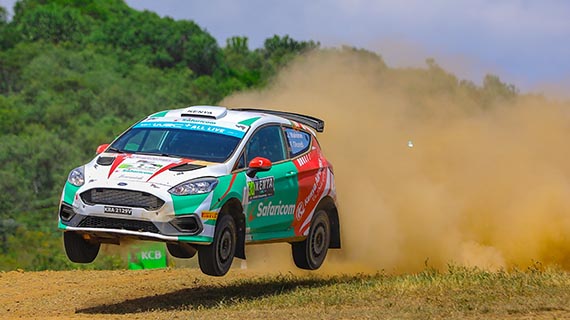 Jeremy Wahome in action in Naivasha

The 23-year-old former BRDC British Formula 3 Championship open-wheel formulae driver hopes to make all the experience and local knowledge count behind the wheel of an M-Sport Poland Ford Fiesta Rally3.

He is one of the Four Kenyan Rally Stars who will be taking part in the WRC Safari Rally this year. The four are sponsored by Safaricom and Kenya Airways   through the FIA Rally Star programme that seeks to support young drivers.

Speaking in Naivasha ahead of the rally , Jeremy says, “We did some of these stages in the Equator Rally, the African Rally Championship in April and did quite well. We finished second on the road, but a small penalty pulled us back to fourth. We are being quite confident on these stages. This year we have a bit more experience. So, hopefully we will be able to use local knowledge and keep building on it to the very end,” Wahome said.

Jeremy posted a good finish last year as he powered his Rally3 machine to a credible 16th overall on his gravel debut.

“I would like to say we are making considerable strides from our rookie experience last year. And with the help of my co driver, I have learnt everything. Last year was quite eventful. Of course, we had five rallies, five accidents, we rolled, we posted good stage times- basically everything in a beginners’ rally book to be ticked off,” said Wahome.

Asked about the challenging Naivasha roads, Wahome went on: “In the rough parts it's rougher, in the soft part it's softer, it’s a bigger challenge than last year. Though, I wasn’t really looking at it that way but from the look of things, you never know what to expect in a Safari. Sometimes in this kind of scenario you have to drive by sight. So, it will be a critical balancing act to push, knowing when to take caution.”