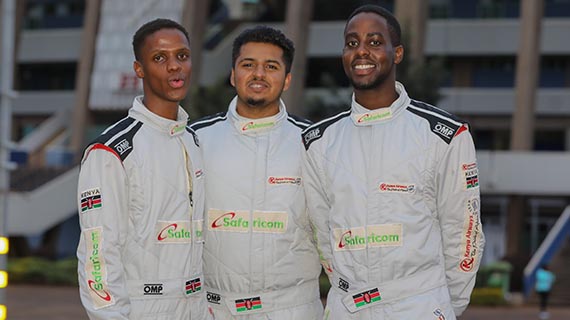 He is bringing in plenty of experience from Sweden where he became the first Kenyan this year to ever complete a rally on snow. Other WRC legs he ventured on are Rally Croatia, Italy's Sardegna, and Portugal.

McRae Kimathi (left), Hamza Anwar and Jeremy Wahome are among the four Kenyan FIA Rally Stars entered for the Safari

FIA Rally Star McRae Kimathi is ready to rumble in the Naivasha jungle when the sixth leg of the World Rally Championship, the WRC Safari Rally Kenya, gets underway in the lakeside town on Friday.

The 27-year-old career accountant will be looking to conquer the WRC3 category after a stint in Europe that saw him rub shoulders with the crème de la crème of the sport.

He is bringing in plenty of experience from Sweden where he became the first Kenyan this year to ever complete a rally on snow. Other WRC legs he ventured on are Rally Croatia, Italy's Sardegna, and Portugal.

“I’m still predicting that Safari Rally will be another tough one this year. Nonetheless, I am excited for my home event. It is always a great feeling revving in front of our wonderful fans,” said Kimathi, who will pilot one of the five M-Sport Ford Fiesta R3 machines listed in the iconic Kenyan fixture.

In his spirited home turf campaign this week, Kimathi will be up against compatriots Hamza Anwar, Maxine Wahome, Jeremy Wahome and Paraguayan Diego Dominguez who completes the five-car WRC3 list.

Dominguez was well on course for WRC3 victory on Rally Italia Sardegna but only lost it due to eleventh-hour ECU gremlins.

Until arriving in Scandinavia ahead of Rally Sweden, Kimathi had never seen snow or ice before and attended the John Haugland Winter Rally School to help with his preparations.

This year’s WRC Safari Rally Kenya is sponsored by KCB Bank, Kenya Wildlife Service, Quickmart and Toyota Kenya among others.