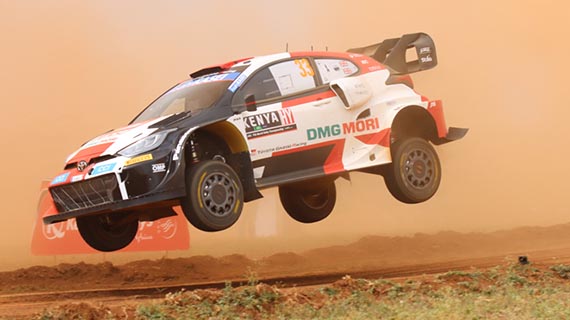 “I came back for the people.” -Those were the emotional words of eight-times World Rally Champion Sebastien Ogier shortly after grabbing the overnight lead on Day 1 of WRC Safari Rally Kenya.

The Toyota Gazoo Racing speedster beat Neuville by 0.6seconds as Ott Tanak of Hyundai came in third, 1.1 behind the leader.

It was a bad day in the office for series leader and shakedown winner Kalle Rovanperä who could only manage a disappointing 11th fastest time. The 21-year-old ran wide on the first left-hand bend and almost rolled his GR Yaris.

He was lucky to continue, but the excursion caused a right rear puncture which cost 11.6seconds.

Ogier’s result was a repeat of last year’s event where the Frenchman beat Kalle on the opening test at the same venue.

His sublime drive through the 4. 84km head-to-head gravel stage treated spectators to some exhilarating displays of hybrid-powered contraptions first used during the season-opening Rallye Monte Carlo.

“It’s very colourful here and the people in this country give us amazing support.   The opener followed a colourful start ceremony in Nairobi which was quite exciting for a start.”

“But the challenge is going to be big. it's going to be really rough in Naivasha, but we will try to survive it," he added.

Kasarani SSS marked the start of the event that will revolve around the lakeside town of Naivasha over the next three days.