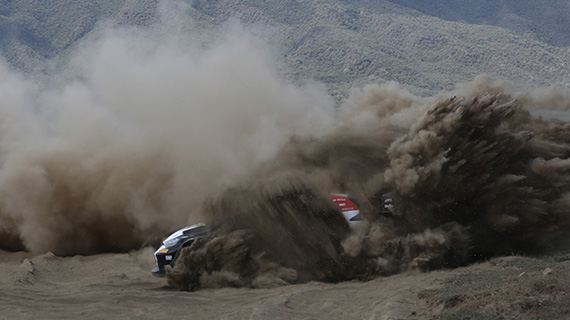 Amaanraj and his partner Gurdeep "Gugu" Panesar also finished 12th overall ahead of Carl Tundo (13th) in the WRC main Class. Amaanraj was incidentally the top crew from Africa region.

Amaanraj and his partner Gurdeep "Gugu" Panesar also finished 12th overall ahead of Carl Tundo (13th) in the WRC main Class. Amaanraj was incidentally the top crew from Africa region.

Both had a good recce prior to the fabled Kenyan fixture and their plan was to keep it clean and tidy and not make a mistake or overdrive.

"The Skoda R5 is a very strong rally car and on Friday we had a small problem on the turbo boost but didn’t affect the timings much as more of the concern and preparation was passing through the Kedong “Fesh Fesh”. '

Gugu- who previously navigated 2015 KNRC and ARC champion Jassi Chatthe- recounted: ''Saturday we kept it slow and steady in Soysambu and Elementaita but attacked in Sleeping Warrior gaining time on our competitors. Afternoon stages was same plan but the Rain made Elementaita and Sleeping Warrior very difficult and we did manage to set some good time."

"Sunday was a clean and fast run for us with no problems at all. In general we had a good clean run but all the WRC and WRC2 drivers are very very quick and difficult to match their pace," said Gugu.

Aakif Vitani was happy with fourth overall in WRC 2 and here's what he had to say about his run in the ex-Manvir Skoda Fabia; "We did one position better than in the 2021 WRC Safari where we finished 5th. Third place was there for us as we were running 3rd in WRC2 on Saturday just before the tie rod and driveshaft failed. But this is rallying...the last stage at Hell's Gate was rough after first loop."

"We hit several rocks very hard and I knew a puncture was coming. It happened 1km to the finish driving on the rim," Aakif explained.

Despite the 30-minutes penalty from Super Rally, Aakif moved and gained two positions on the final day.

"A big Big thank you to our sponsors Enashipai who have been super in looking after us pre and post event."