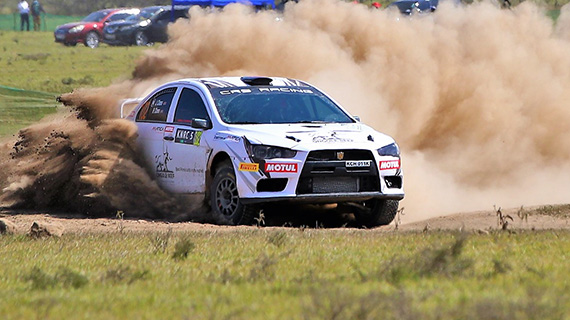 The former Group S Champion finished second overall in the WRC Safari Rally KNRC category to boost his chances of a maiden title.

Jasmeet Chana and his brother Ravi Chana are looking forward to the rest of the Kenya National Rally Championship (KNRC) with great expectations.

The former Group S Champion finished second overall in the WRC Safari Rally KNRC category to boost his chances of a maiden title.

"I am ready to fight at the sharp end of the tough series where some of my opponents drive superior Rally2 machines," Jasmeet noted of his immediate plans.

With the 2022 WRC Safari Rally Kenya also counting towards the KNRC series points went for the jugular behind the roar of hybrid powered Rally 1 cars, the Rally 2s and Rally3s.M

"Our podium finish in the National category of Safari was such a great feeling. We had a steady run and I'm flabbergasted that each time I have set foot on the cockpit I have finished second which is very important," said Jasmeet.

The Motul Kenya Ltd and Ongole Beef sponsored driver ran the Safari behind the wheel of a Mitsubishi Lancer Evolution 10 same as "Flash" Tundo  who won the Kenya National category.

But Tundo has only participated in one of the five events held so far in Bisil, Nakuru, Eldoret, ARC Equator in Naivasha and Safari and is out of contention for the title by virtue of missing most of the events.

"Our Safari Rally 2022 was all good. Friday we were ready to attack the stages unfortunately every time we neared the Kedong stage it was red flagged for the national cars!! "

"But we managed to do Loldia and Geothermal twice. Saturday was a good day. We managed to do all the stages. Sleeping Warrior was a test of man and machine.  The amount of cars we found on the side of the stages was unbelievable."

Jasmeet, who ran the Safari with Ongole Beef as his sponsors, was happy to interact with the world's best in Naivasha, more so Hyundai Motorsport core driver Thierry Neuville who got stuck on one of the stages. But Neuville went on to win the Power Stage to salvage some bonus points.

"We also had the pleasure of Thierry showing us the okay sign (cool) while he watched our Evolution X going through the mud like a Massey Ferguson tractor!! "

We had a good time with the World Rally Teams."

The reigning Group N Champion says his Sunday stage times were impressive, which was a good morale booster on his assured match to the finish.

"Our stage times spoke for themselves Sunday. We knew it would be difficult again because of the fesh fesh section in Narasha Stage. But we managed a good time at Oserian which was a mix of using our heads and getting through."

Jasmeet was navigated by his elder sibling Ravi Chana in their Ongole backed Evolution machine.

"I wish to thank Ongole Beef for their support and helping me table the Safari Rally," said Jasmeet who is a former multiple Two Wheel Drive champion in a VW Golf GTi and Group S Champion in a Celica GT4.