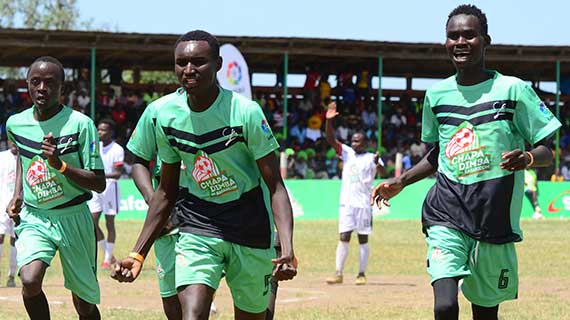 Ulinzi Youth and the Juja Youth Soccer Association (JYSA) saw off nervy slim wins to set up a tough tie against each other when they clash in Sunday morning’s Chapa Dimba na Safaricom Boys Final at the Nanyuki Stadium.

Ulinzi, participating in the tournament for the first time beat Kirinyaga’s Kiamatugu with Brian Kafero scoring the lone goal in the first half. JYSA meanwhile needed a late goal from Roy Kimoi to see off a tough Irigiro side 2-1.

The Murangá side had gone ahead through Pio Ouma but Dickson Elegae scored the equalizer for JYSA before Kimoi slotted home the winner with five minutes left on the clock.

After having a goal disallowed, Ouma broke the deadlock early after making the most of a blunder from JYSA keeper Michael Boas who tried to turn from him in a dangerous area.

The lanky forward dispossessed him and slotted home with a beautiful rabona kick.

The Juja based side had another brilliant chance in the 27th minute but were denied twice. Kimoi had a shot from the right well saved by the keeper with Robert Khalfa’s shot from the rebound cleared off the line by Zablon Muya.

In the second half, it was more of a tough contest, the two sides balancing on the scales. Irigiro’s Muya had a good chance five minutes after the restart but he shot over and wide from the right with space ahead of him.

The best was left for last when Kimoi slotted home after turning around three defenders having picked up a decent pass from skipper David Kiarie.

In the second semi, Ulinzi Youth, who are an understudy of Kenyan Premier League side Ulinzi Stars needed an early goal to settle their duel with Kiamatugu. Kafero broke the deadlock after 17 minutes when he connected to an Anthony Masinde cross from the left.

After the goal, Ulinzi still commanded possession in Kiamatugu’s half and came close again in the 19th minute but Kelvin Akmat’s shot from range went just over with the keeper off his line.

Kiamatugu were limited in their forays upfront, but they were given a chance in the 25th minute off a freekick from range, but Stephen Mwaniki struck inches wide with the keeper well beaten.

The second half was a closely contested affair but the home side had more chances with George Okwaro shooting wide unmarked from the left while goal scorer Kafero had two more chances with shots from inside the box that went wide.