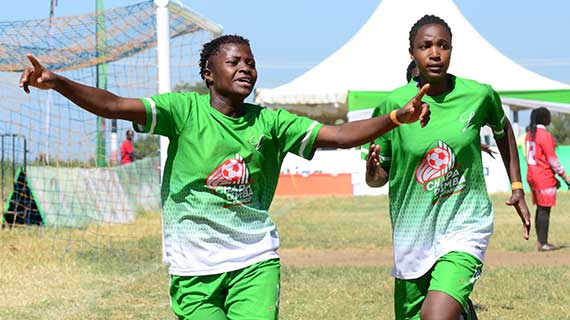 For the third season in a row, the Chapa Dimba na Safaricom Central region final will be contested between Limuru Starlets and Nyahururu’s Falling Waters. The two sides will face off  in the finale on Sunday morning after winning both their semi-final duels on Saturday.

Limuru were 5-1 winners over Achievers Queens while the defending champions Falling Waters, previously called Barcelona Queens, made light work of Karima Queens before thrashing them 12-0.

She scored the second in the 28th minute after beating two defenders before shooting low past the keeper. Two minutes later, she scored her second after picking up a long ball and calmly beating the keeper.

The defending champions made light work of their opponents and they extended the lead in the 37th minute when Nanjala skipped past a defender before shooting into the bottom right corner.

Two minutes later, it was five to the good when Wanjiru volleyed home after the keeper spilled a cross from Ariviza

It was same script in the second half and Karima’s day went from bad to worse when they had to change their keeper Mercy Wangechi who picked up an injury and they had to replace her with an outfield player from the bench as they didn’t have a reserve keeper.

And the new girl between the sticks earned a rude welcome as straight from kick off, Njeri scored her third. Skipper Lutomia then made it 7-0 with a brilliant freekick from range and Njeri then made it eight with a sensational shot from the edge of the area.

Lutomia added her second with an audacious shot from 40 yards out, making it 9-0. In the 64th minute, Nanjala completed her brace with a cheeky dink over the keeper before substitute Wangui scored the 11th with a simple tap in after the keeper spilled a shot from Njeri.

Ariviza then added the final nail on Karima’s coffin at the stroke of full time to hand the holders a massive confidence boosting victory.

Limuru broke the deadlock in the 17th minute when Akinyi volleyed the ball home from the right. They were 2-0 up after 37 minutes when Muthoni picked up a ball behind the defence before slotting past the keeper.

Coming off the break, Limuru who won the first edition came back with venom and just seconds in they were 3-0 up straight from kick off.

But, straight from the restart, the former champions were 3-0 up. Ofula scored with a beautiful touch away from the keeper after Limuru went straight into offense from kick off. Four minutes later, the game looked sealed and set when Akinyi scored her second of the afternoon with a brilliant finish from the left.

Achievers had a chance to narrow the gap when they won a penalty following a handball inside the box, but star forward Lucy Wanja shot the effort straight at the keeper who made a routine save.

They were punished later when Akinyi completed her hattrick, gliding past the keeper before slamming the ball into an empty net.

They scored a consolation later on with five minutes left when an unmarked Mercy Wanjiru lifted the ball over the keeper from the right.