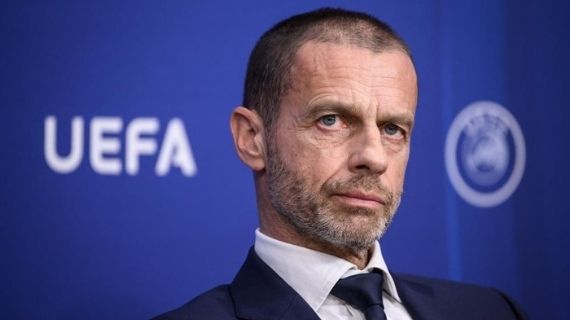 ‘Following an exhaustive consultation with stakeholders in the game, the Uefa Executive Committee has today in Vienna approved the final format and access list for European club competitions as of the 2024/25 season,’ a UEFA statement read.

European soccer body Uefa has scrapped its coefficient plans for the Champions League from the 2024/25 season and insisted the U-turn has occurred due to its ‘commitment to the principles of open competition’ following an exhaustive consultation.

An agreement was reached in Vienna between Uefa and the European Club Association (ECA) on access to the new-look competition, which will now award two Champions League places to countries whose clubs collectively performed best in Europe during the previous campaign.

There had been a proposal to award those places in the new 36-team league phase to individual clubs based on European performances over five years, but following a raft of criticism and after Tuesday’s Uefa Executive Committee meeting, a change has been made.

It means if the decision to award two places to clubs from countries who performed best in Europe in the previous season had been brought in for the 2022/23 term, England and Holland would gain an extra spot each.

The other key amendment voted through in Austria related to the reduction from ten matches to eight in the new Champions League phase, which was first proposed in April last year to follow the ‘Swiss system’.

‘Following an exhaustive consultation with stakeholders in the game, the Uefa Executive Committee has today in Vienna approved the final format and access list for European club competitions as of the 2024/25 season,’ a Uefa statement read.

‘This confirms Uefa’s strong commitment to the principle of open competitions and sporting merit, while recognising the need to protect domestic leagues.’

The ECA added in a statement: ‘ECA has worked together with Uefa since the reforms were first initiated a number of years ago, to ensure the most balanced and progressive evolution to the club competitions.

‘As the representative voice of the clubs who participate in these competitions, ECA has long championed reforms to make club football across all European competitions more sustainable, inclusive and successful.’