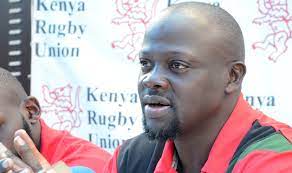 Innocent Simiyu has been sacked as Shujaa Head Coach.

A statement from the Kenya Rugby Union on Wednesday evening reads in part, "The Kenya Rugby Union (KRU) has opted to part ways with Innocent Simiyu, Head Coach of the Kenyan men’s national sevens team, Shujaa.Also leaving the Shujaa set up are technical bench members Michael Shamiah and Anthony Muchiri.We offer our sincerest thanks to Innocent, Michael and Anthony for their tireless efforts and extend our very best wishes for the future."

"He boasts close to thirty years coaching experience, having most recently led Germany 7s to victory at the World Rugby Challenger Series in Chile in 2020. He previously coached Canada 7s between 2016 and 2019, leading the Canadians to the cup title at the 2017 Singapore 7s.

Prior to the Canadian job, Damian was in charge of the Samoa 7s squad during the 2015-16 season, leading them to the cup title at the 2016 Paris 7s.

He also coached England 7s at the 2002 and 2014 Commonwealth Games in Manchester and Glasgow as well as the 2005 Rugby World Cup 7s in Hong Kong," reads the KRU statement.

Kevin Wambua, who has been a part of the Shujaa set up, will assist Damian in ensuring a seamless transition while Geoffrey Kimani takes up the Strength & Conditioning coaching role.