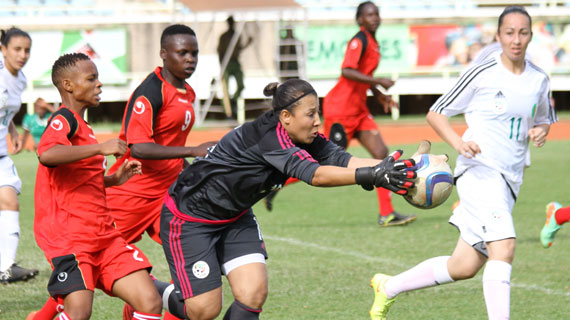 The national women soccer team has earned themselves a date with the head of state President Uhuru Kenyatta following their historic qualification to the Africa women Cup of Nations to be held in Cameroon in December.

This was communicated to the team by the Sports Minister Hassan Wario when he addressed the players after their maiden qualification at Kasarani on Tuesday .

Wario further  promised to reward the girls with 200,000 shillings for the qualification and pledged an even heavier individual reward if the team comes home with the African title.

"You have made the nation proud and we are all proud of you. You played with passion and we have seen amazing talents. The government promises to give you full support in your preparation for the Cup of Nations. Kenya loves you." Wario said as he met the players  in the dressing room after the match.

Kenya knocked out Algeria on away goal advantage after the two teams played to a 3-3 aggregate draw. Kenya picked two crucial away goals in the 2-2 draw played in Algiers before coming from a goal down to draw 1-1 in Nairobi on Tuesday to qualify for their first Africa Championship appearance.