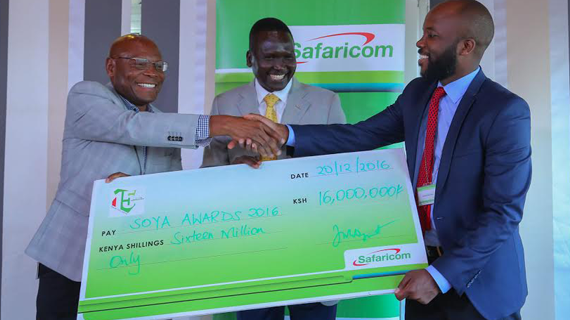 Safaricom will sponsor the  2016 Sports Personality of the Year Awards (SOYA) to a tune of sixteen million Kenyan shillings.

The event which will be marking its 13th edition will also see the Sports Personality of the year 2016 walk away with Kshs 1Million.

Various individuals in 16 categories will be feted in different disciplines including federations , coaches , persons with special need and community heroes.

The event set for 20thJanuary 2017 at the Carnivore Grounds  seeks to recognize outstanding achievements by Kenyan sportsmen and women.

Kenya achieved its outstanding performance this year at the Rio Olympic Games after securing six gold, six silvers and a bronze medal.

Prior to the Olympics, the Rugby 7s team made Kenya proud in April with a historic performance at Singapore Sevens after a dominating 30-7 victory over series leaders Fiji in the finals.

The great shows of prowess from Kenyan teams and individual athletes is expected to make this year’s Safaricom SOYA Awards extremely competitive, as dozens of nominees battle  it out for the top spot.

“This has been an outstanding year for Kenyan sportsmen and women and we are glad that their hard work will be awarded at a ceremony befitting their achievements,” said Joe Ogutu, Director Strategy and Innovations – Safaricom’s.

He added: “Despite the obvious challenges in the management of sports our commitment remains strong through our investment in the Safaricom Athletics Series, and the various partnerships that we have with stakeholders in the sports sector. We have supported this initiative for the last 13 years, investing well over KES100 million in that time, and plan to continue supporting our athletes in the next year.”

The theme this year is “Inspiring Greatness”, and seeks to motivate athletes to remain focused and resilient while training, competing and even mentoring others.

“Safaricom has been one of our greatest partners since we 2003 and with their support, SOYA has become a premier sporting event on the continent. To me, this event is more than the glamour that surrounds it: it’s about giving athletes the recognition and honour they deserve, because they sacrifice a lot to bring glory to Kenya,” said Paul Tergat, Founder and Chairman, SOYA Awards.

“By showing them our gratitude we encourage young people to train and become professional athletes, which has in turn enabled us to support more homegrown talent and have a platform from which we can celebrate our sportsmen and women here at home, in front of their families, friends and fans,” added Mr. Tergat.

Ethiopia's retired athlete Hails Gebresellassie who was recently elected as the chairman Ethiopian Athletic Federation will grace the event as a chief guest.

The sponsorship funds will be used to cater for event logistics and prizes.