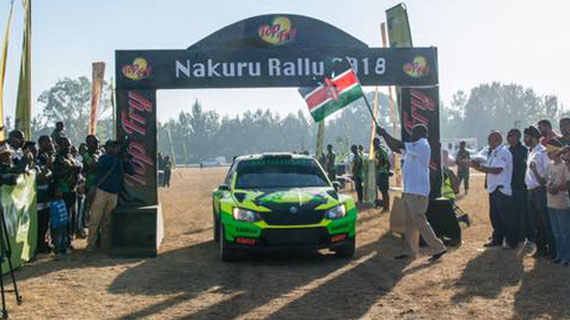 Driving in their powerful Skoda Fabia, Rai and Dawe cruised to the ramp with a time of 1:28:04.3 ahead of Baldev Charger who was close in second place  (1:28:20.7) with former champion Ian Duncan finishing third . The drivers covered 367km with a competitive distance of 150km

Manvir Baryan navigated by Drew Sturrock in a Skoda Fabia was fourth while Carl Tundo managed a 5th position clocking 01:35:27:6

The rally was flagged off at Nakuru Athletic Club by Nakuru Governor H.E Lee Kinyanjui flanked by KCB Head of Customer Experience Mr Job Njiru.
KCB Bank has injected Sh20 Million in supporting Motorsport this year. The bank will retain recognition as title sponsor to the Autocross championship of 10 events and a co- sponsor to the 2018 KNRC 7 events.