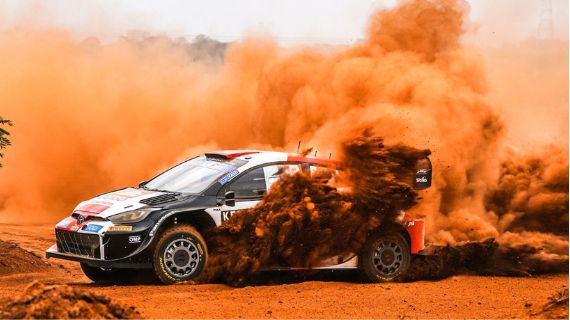 Ogier, who is contesting a partial programme with Toyota Gazoo Racing this season, edged Hyundai Motorsport star Thierry Neuville by just five-tenths of a second in the curtain-raising two-at-a-time Super Special Kasarani on the edge of the capital.

Sébastien Ogier kicked off his Safari Rally title defence in style with the fastest time on Thursday afternoon’s thrilling opener in Nairobi.

Ogier, who is contesting a partial programme with Toyota Gazoo Racing this season, edged Hyundai Motorsport star Thierry Neuville by just five-tenths of a second in the curtain-raising two-at-a-time Super Special Kasarani on the edge of the capital.

Ott Tänak brought up the rear of the podium, the Estonian only 0.5sec down on his i20 N team-mate.

Ogier took an unlikely win in 2021 when the Safari returned to the WRC following a 19-year absence. The Frenchman recovered from over two minutes back with a storming drive and at that moment fell in love with Africa’s landscapes and culture.

“I came back for the people,” said the GR Yaris driver. “It’s very colourful here and the people in this country give us amazing support.

“The challenge is going to be big. It's not the kind of rally I usually love because it's going to be really rough, but we will try to survive it," he added.

Championship leader Kalle Rovanperä languishes in 11th after making a disastrous start. The 21-year-old ran wide on the first left-hand bend and almost rolled his GR Yaris. He was lucky to continue, but the excursion caused a right rear puncture which cost 11.6sec.

"I was a bit on the limit under braking,” he explained. “Nothing really happened, but we had a puncture. That was a big shame, but it's a long rally and we will try to focus on the week ahead now."

The stage followed a colourful opening ceremony in central Nairobi, with competitors flagged away by Kenyan President Uhuru Kenyatta.

Friday’s opening leg spans the north and south sides of Lake Naivasha. It includes Loldia (19.17km) and Geothermal (11.68km) - a brand-new stage which climbs over craggy rock-lined hills - as well as Kedong (31.25km), which is the longest stage of the rally.