Nikhil Sachania: Living Embodiment Of The Spirit Of Motorsport 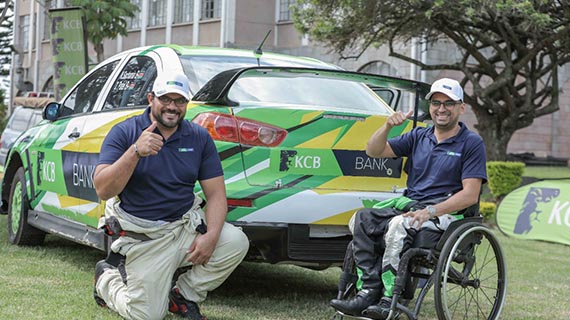 In September 2011, Nikhil was involved in an accident in Athi River where he was testing his new quad bike with Shazar Anwar and Zane Young trying to get ready for his would-be first National event.

Nikhil Sachania (right) and navigator Deep Patel pose for a photo during the sponsorship launch.

Physically challenged race driver Nikhil Sachania is the living embodiment of the incredible spirit of motorsport.

The reason he works so hard in this noble “man and machine” game is because he also wants to encourage more people with disabilities to achieve their full potential in whichever sporting disciplines they undertake.

Having earlier committed to entering selected races in the 2022 rally-sport season, the Project Manager with Samani Construction Ltd is grateful to KCB Bank for enabling him return to the sport he hitherto loves despite the challenges he has had to contend with.

Nikhil and his able-bodied partner Deep Patel will form part of the Mitsubishi EvoX two-car KCB drivers' line up for the upcoming WRC Safari Rally Kenya alongside Evans Kavisi and Absalom Aswani.

“With the current economic status in the country, sponsorships are few and far between. I was not going to drive the full season in 2022; but with KCB on board, I am overly excited to be back in the saddle.”

Disability is not Inability--

So how did his motor racing passion change his life?

In September 2011, Nikhil was involved in an accident in Athi River where he was testing his new quad bike with Shazar Anwar and Zane Young trying to get ready for his would-be first National event.

He then hit a rock at high-speed and landed head first. The impact shattered his spine. But guess what? Nikhil’s deeply ingrained racing convictions will always bring him back to the bucket seat of a rally car time and time again!

“I have always loved motorsports, I can’t remember my first encounter but it would be from stories of my dad's rallying days in the 1980's.Well, during my rehabilitation (after the accident), there were two or three people that were driving in our team so it never really slipped my mind. “

“As soon as I had enough strength, I jumped into the first car I could get. My father and my uncle (Kiran Patel) gave me the kind of advice or guidance I needed, so I always knew whom to turn too.”

“The first three months were the hardest, since I had also broken my left hand. Getting around was very difficult and frustrating. But once I got back, everything was back to normal- work the next day and partying over the weekends!”

"All my cars are hand controlled. The operation is a simple push and pull lever mechanism- pull to accelerate and push to brake."

1. Kenya Motorsport Personality of the year 2014.