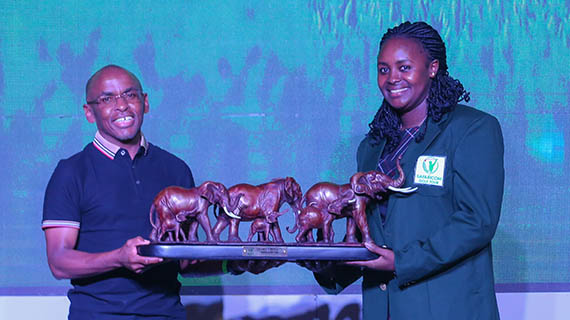 Playing off handicap 37, Githinji, who had qualified for the finals after winning the Ladies Category during the opening leg in Nanyuki, returned a score of 47 Stableford points courtesy of 23 points in the front nine and 24 points in the back nine to claim the overall title.

After 14 legs played over a period of Seven months, The inaugural Safaricom Golf series climaxed on Saturday with Nanyuki’s Marion Githinji  being crowned the overall champion during the Grande final played at the Vipingo Ridge Golf Course.

Playing off handicap 37, Githinji, who had qualified for the finals after winning the Ladies Category during the opening leg in Nanyuki, returned a score of 47 Stableford points courtesy of 23 points in the front nine and 24 points in the back nine to claim the overall title.

Grace Naserian from Kenya Airforce won the ladies’ prize with 44 points ahead of Elizabeth Njau of the Royal Nairobi Golf Club, who settled for the Runners up on 32 points.

Kericho’s Dr.Kipkirui Langat fended off stiff competition from his club-mate Erastus Orina to emerge the winner with 36 points on countback.

In a post championship interview with michezoafrika.com, Githinji attributed her great accomplishments in Vipingo to a calm, cautious approach as she played under no pressure, “I came here to have fun and enjoy the experience especially because this was my first time playing on this course.” She said.

“This is an extremely beautiful course and the fact that it is a PGA course just gives you good anxieties and you want to play better. But the wind was troublesome to most players, I remained calm, played easy and every stroke just accepted the feel. I am glad I got called last on stage for that sweet feel handshake with the CEO. I thank Safaricom for making this happen, this experience is irreplaceable. It feels incredible and at the same time unbelievable to win this title.” She added.

Meanwhile, claiming the Best Nines prize were Justine Ongere on 22 points and Virginia Munyau on 23 points, with Habil Olaka who was playing off handicap 19, settled for the Guest prize award on 42 points.

The Saturday finals at Vipingo marked the close of the inaugural Safaricom Golf Tour series that was launched in January at the semi-public Golf Park, with the tour having traversed 14 golf courses across the country, namely: Nanyuki, Limuru, Muthaiga, Nyanza, Machakos, Eldoret, Karen, Nyali, Kericho, Kitale, Nakuru, Kenya Airforce, Vetlab and Royal Nairobi Golf Club, drawing a field of more than 9,000 participants in various tournaments, junior clinics and outreach programmes.

"Our partnership with the Junior Golf Foundation has played a great role in discovering and nurturing new talents across the country. I thank all the stakeholders who have made our inaugural series successful. Through the spirit of Tuinuane, our series has been able to discover, nurture, lift and expose over 4,000 juniors through the golf tournaments, clinics and outreach programme," said Peter Ndegwa, CEO Safaricom.

The junior tournament winners will have a chance to attend a 3-day elite camp later in the year. Junior Golf Foundation will conduct the Training in partnership with the US Kids Golf Foundation.