Nakumatt hunt down flat Posta to move off relegation 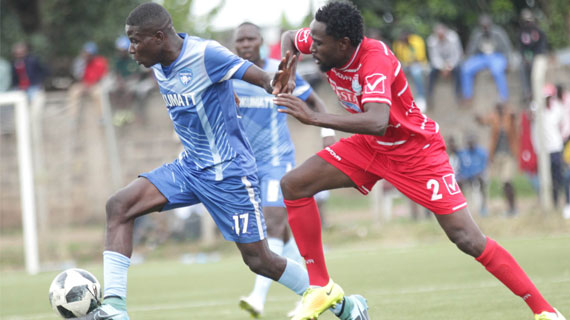 Nakumatt FC has finished the first leg out of the relegation zone after their 2-0 win over Posta Rangers on Sunday lifted them to 15th spot in the standings.

Boniface Mukekhe’s goal and a Luke Ochieng own goal gifted Anthony Mwangi’s side maximum points with Posta left in sixes and sevens.

A brilliant start by Nakumatt saw them break the deadlock nine minutes into the game, Mohammed Nigol citing Mukhekhe with a brilliant long ball from the right and the winger making the most of the pass with a superb volley that left keeper Martin Musalia rooted to his spot.

Posta seemed lost and Nakumatt were running rings around them with the defensive pair of Suleiman Ngotho and Kennedy Onyango having a torrid afternoon. In the 19thminute, a swift movement of feet from Kevin Thairu saw him skip past Onyango on the right before laying the ball up for Eugene Ambulwa who shot high over the bar.

Ngotho almost gifted Nakumatt a second goal when he controlled the ball in the box unaware of Mukhekhe’s presence on his shoulder, the winger stealing the ball but failing to beat keeper Musalia who made a good stop one on one.

Onyango who was the culprit of defensive mistakes almost turned the ball into his own net from a Faina Jacobs cross, but keeper Musalia made a good reflex save.

Onyango who was playing against his former team was hauled off for his weaknesses in defense after 27 minutes and his place taken by Luke Ochieng.

Nine minutes from the break, Posta had their best chance of the half when Gershon Likonoh released Jeremiah Wanjala on the right, but the forward’s shot came off the side netting.

In the second half, Posta came back fighting but poor finishing was their biggest undoing as they didn’t know what best to do when they had the ball in the final third.

Likonoh had a chance later on with a shot from the edge of the area that was deflected off for a corner.

But, Nakumatt ensured they finished the game with eight minutes left when Mukekhe picked up a cross from Brian Nyakan, striking goal ward with Ochieng heading it into the net as he attempted to cut it off.