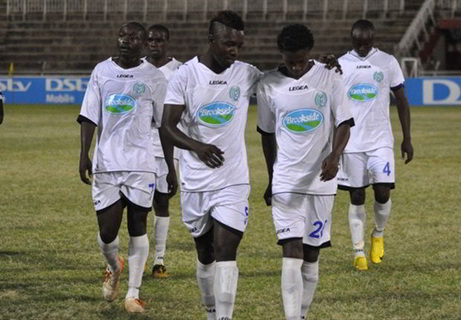 Vihiga United bowed down to Thika United as the latter won 1-0 away at the Mumias Sports Complex, thanks to an eighth-minute early goal from Shami Kibwana on Sunday.

The Vihiga fans packed Mumias complex was not a hindrance to the determined boys from Thika who took control of the game eight minutes into the match. Kibwana calmly capitalized on defensive mistakes at Vihiga's goal mouth, picking up a loose ball in the 18-yard box before beating Geoffrey Oputi and finding the net

The score could have been doubled in the 25th minute when Asud Abdalla nutmegged Bernard Ochieng to hit the crossbar. By now the bright Vihiga United fans had gone silent, as Thika United time and again held their backline airtight to put the menace from Vincent Wonder at bay. Godfrey Airo and Christopher Masinza also proved to be a threat to the Thika backline but the Thika Municipal Stadium based players were determined to take all the three points home after a painful defeat from AFC Leopards on the previous match day.

At the break Edward Manoah, the Vihiga tactician made changes to his team, replacing Mike Isabwa with Daudi Saisi. At the same time, John Njogu introduced Masakidi Mata in Eugene Mukangalu's stead.

The rest of the match remained silent with only two occasions where Thika received yellow cards for Mwinyi Kassims lunge into Chris Masinza and David Agesa's foul on Fernandez Tera.

Manoah, in an after match interview, expressed his dissatisfaction at his strikers for spurning several scoring opportunities in the match.

Thika United are now up the table at the 14th berth on 18 points while Vihiga sits on 12th only a point above.