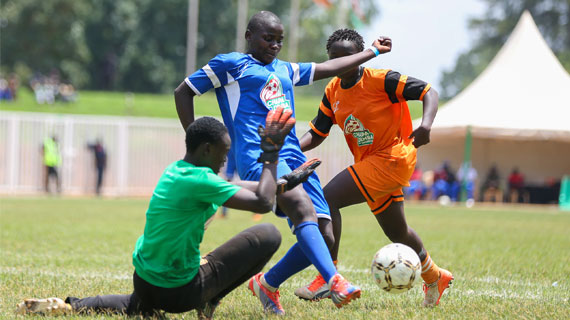 Having been declared as the national’s tournament top scorer, Plateau Queens striker Mercy Akinyi is excited to see her dream actualized after guiding her team to the golden finish during the Safaricom Chapa Dimba Finals held in Kakamega on Sunday.

Plateau Queens won 4-3 against Tar Tar girls from West Pokot in a post-match penalty shootout to be crowned national champions after a 1-1 draw in regulation time.

The two winning teams – Kapenguria Heroes and Plateau will each win a dream trip to London in April where they will be meeting tournament Ambassador and Kenyan soccer captain Victor Wanyama who turns out for Tottenham Hotspur.

In addition , each of the top two teams bagged 1 Million shillings in prize money.

“It is a good feeling to win against such a tough opponent. We have fought hard and we have come a long away. Today is a big day for us and we are so happy. Most of us come from a poor background but now we can smile while knowing the KES 1M will help us solve many of our problems. I still cannot believe we will be flying to London, but yes, it is true. This is a big thing for us,” said Mercy Akinyi, top scorer Plateau Queens.

The tournament launched in June last year with an aim of  promoting grassroot football and propelling gifted players into the national teams, already boasts to have some of the tournament’s top players such as David Majak, Fredrick Krop, Hassan Iddi and Ahmed Subri signed up for Kenya Premier League teams.

The likes of James Omsinde, Alpha Chris, John Njuguna, and Yusuf Mainge are among 13 players who have also earned call-ups to the national under 20 team.