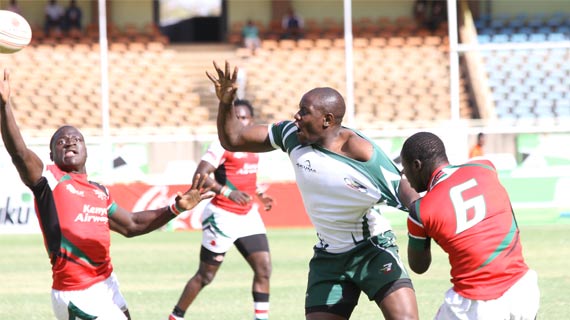 Debutants Levi Amunga and Brian Wahinya crossed the chalk in the first half to give Kenya a 10-5 win over hosts and defending champions Zimbabwe and clinch the Victoria 7s title on Sunday evening.

Riaan O’Neil scored for the Zimbabweans early in the second half to leave a nervous end to the tie, but Kenya were fortunate to ensure they kept the single-try gap and bag the crown on their maiden appearance.

Kenya Rugby Union took a second string side with the main squad focused on the Hong Kong Sevens and the Commonwealth Games and they did not disappoint.

Amunga dotted down a superb try after sprinting half the length of the pitch after Kenya had won possession off a Zimbabwe scram. Amunga stepped inside to his left before finding space and bursting through a tackle, keeping his feet on the ground to dash and touch down under the posts.

From an easy conversion, teammate Wahinya blasted the ball on the posts. But, he made a consolation minutes later with a great try. The Scrum-Half sneaked away from the sleeping Zimbabwe backs from a scrum before dotting down on the left.

Shujaa kept the score 10-0 at the break.

Coming on for the restart, the hosts pushed forward by a handful crowd kept possession straight from kick off and were rewarded when O’Neill dotted down on the left after some patient build-up.

The hosts had a numerical advantage when Frank Wanyama was sin-binned, but they could not take maximum advantage. Kenya twice won possession and gave back at crucial times, but lucky for them, Zimbabwe erred in ball handling and they kicked out at the buzzer.