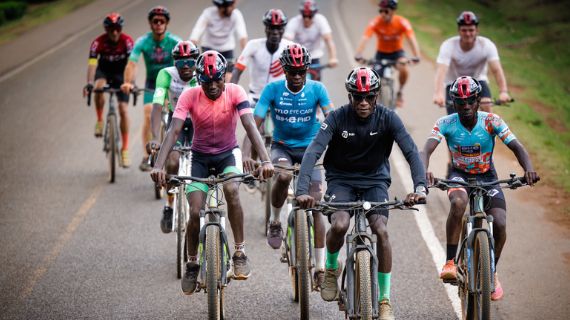 Multinational chemicals company Ineos is further committing to the development of cycling in Africa by launching a new academy in Kenya.

The new team will run in partnership with British-based cycling team Ineos Grenadiers, of which it is the owner, as well as the double Olympic marathon champion and world record holder Eliud Kipchoge.

The development of the new academy will take place at the Kipchoge's Kaptagat training centre, and will be called the Ineos Eliud Kipchoge Cycling Academy.

Ineos is hoping the partnership will help develop cycling in Africa, as well as providing aspiring young African athletes with greater opportunities. Ineos' said its aim with the continued investment is to yield the maximum potential from the partnership, which would mutually benefit both parties.

Ineos’ Director of Sport and the Ineos Grenadiers Team Principal, Sir Dave Brailsford,  said: “This is a significant and exciting development in world cycling - it has the power to drive lasting change by developing new riders from Africa.

"We all know the talent is there – we’ve seen it this year with Biniam Girmay’s history-making successes at the Giro d’Italia and Gent-Wevelgem, and I saw it first-hand in the inspiring young athletes I met in Kaptagat. Their passion, dedication and love of sport is a perfect fit with the Ineos Grenadiers’ spirit of giving it all to race and be your best.

"Together I believe we can achieve something unique and important for cycling in Kenya, Africa, and the sport itself.”

Ineos Chairman Sir Jim Ratcliffe visited the camp with Brailsford and Kipchoge, and came away "convinced" deepening the commitment to the sport in Africa would produce positive results. Kipchoge also expressed his optimism as the facility expands from a purely athletics focussed training camp towards a wider kind of sports academy.

Valentijn Trouw will run the Ineos Eliud Kipchoge Cycling Academy. Trouw has over 30 years' experience in identifying and developing long distance runners in Kenya, helping to nurture Olympic champions in the process.

Ineos is hoping his knowledge and expertise will help to create a world-class, sustainable academy in Kenya, providing Ineos Grenadiers with talented cyclists as a result.

Trouw said: “We work with the great potential of east African long-distance runners for over 30 years, and I believe the exceptional local endurance talent combined with the great training environment at Kaptagat will be perfect for developing quality cyclists. Working together with Sir Dave Brailsford, the Ineos Grenadiers Cycling Team and tapping into the broader Ineos sporting family will bring us the world’s best practice in competitive cycling.

“I am excited by the opportunity to build a relatively new sport in Kenya, in good harmony and collaboration with the Kenyan Cycling Federation, bringing together our collective knowledge and insights from running and cycling for the benefit of the sport.”

Kipchoge said, “I'm proud that we are expanding our Kaptagat based training camp from a purely athletics focused training camp towards a wider kind of sports academy. The INEOS Eliud Kipchoge Cycling Academy is a very natural fit with great potential to enable our young talented cyclists to make the next steps towards the top level of cycling. The future is bright.”