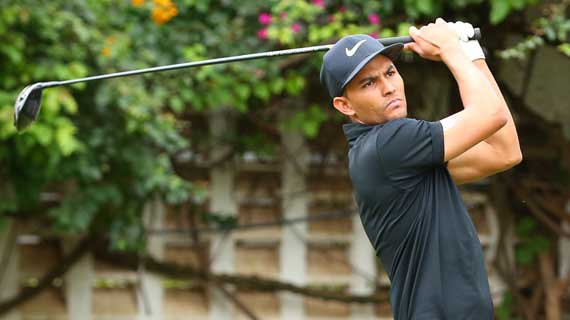 Greg Snow hopes to break the jinx when the crème de la crème of Sunshine Tour swing into action this week at the par 72 Karen Country Club.

No Kenyan professional has won the coveted ‘blue jacket’ since the inception of KCB Karen Masters in 2017.

But one of Kenya's finest pro golfers Greg Snow hopes to break the jinx when the crème de la crème of Sunshine Tour swing into action this week at the par 72 Karen Country Club.

The Muthaiga Golf Club professional candidly admits he is tired of living in the shadows of visiting Sunshine Tour stars after skipping last year's Karen Masters and missing the cut at the European Tour Magical Kenya Open earlier in the year.

Missing the Kenya Open cut and a no-show at last year's Masters saw him secure a slot for this week's event in the recently concluded Professional Golfers of Kenya (PGK) Road To Masters Order of Merit.

Snow remarked in an interview: "Obviously the plan is to win the event and just to have a solid week and play some good golf. I have been practicing at Karen and getting ready for the week. The course is in superb lush-green condition and I can only hope for the best.  To set the Karen Masters ball rolling, I will go for the cut and after securing a place in the money bracket, I will definitely take the last two rounds as they come."

Snow, who has previously finished in the top 10 during the Challenge Tour Kenya Open, has fond memories of the Karen course where he also finished fourth in the inaugural Karen Masters in 2017 behind Netherland’s Will Besseling who then played an excellent 12 under par 132 to emerge the winner with a prize money of 4000 US Dollars to boot.

His countryman Reiner Saxton scored 10 under par 134 while Englishman Tom Murray came third with a score of 8 under par 136. Snow settled for fourth on 7 under par 137 after rounds of 71 on a penultimate day and 66 on the last day.

“I hit good putts and tee shots in Karen but it's just one of those days when this doesn't happen, that's golf,” Snow quipped,  adding: “My attitude has been much better in Karen -just something I’m going to have to persist with this week as I  keep putting myself in leading positions.