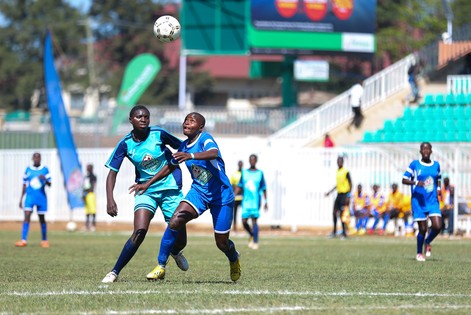 The Chapa Dimba na Safaricom Tourney went into its second last day with an exhilarating anticipation as West Pokot queens, Tar Tar Girls, face off with their Nyanza Counterparts, Plateau Queens in a grand finale clash for the girls' category. The two girl teams will fight for the National Glory on March 24, 2018, at the Bukhungu Stadium in Kakamega County, a venue that will also see the boys head into the Semi-Finals.

Tar Tar girls' road to the finals has been marked by resounding victories in the preceding finals. However, it was everything but smooth sailing as they faced Arch Bishop Njenga from Western in a tough semi-final. The match, which was played on March 23, 2018, at Bukhungu Stadium ended 2:0 with Tar Tar proceeding to today's finals.

Julius Natoka, Tar Tar Girls' coach, in an interview after the match, acknowledged the experience of Arch Bishop Njenga in a display of a good game. He expressed his gratitude to the fans whom he says were instrumental in turning the tide their way, a kindness that the girls responded to in kind with two awesomely taken goals from Nanjala Martha -26th Minute and Nanjala Lindi- 59th Minute.

Plateau Queens, on the other hand, booked their place in the final with a skillful rampage, running over Limuru Starlets 6:0 in regular time. Mercy Akinyi who saw the net four times (28th, 34th,  68th & 74th Minute) becoming the top scorer congratulated her teammates for the display and reiterated their commitment to the glory of visiting Victor Wanyama in London as the Champions. The other two goals were scored by Atieno Magret -19th Minute and Awuor Valentine- 70th Minute.

Plateau Queens and Tar Tar girls pocketed KES 500,000 cash reward and will proceed to the grand finale set for Sunday 24th March where they will fight for KES 1M and opportunity to go to London for one-week training camp and mentorship in April.

The communication company has invested KES100 million towards the program, which includes KES10 million worth of prizes, as well as funds for the renovation of select community, pitches through a legacy programme.