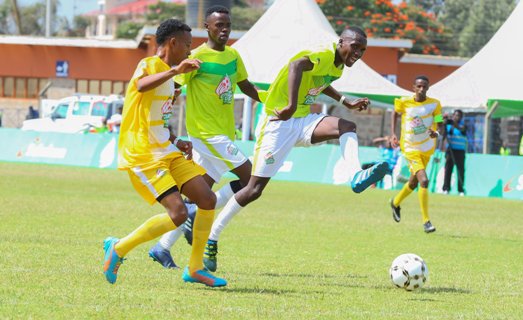 The Safaricom sponsored national U-20 youth soccer championship, Chapa Dimba, will this weekend head to Central Kenya where regional finals to determine the regions representatives will be played at the Thika Training Grounds.

Only two teams from the eight that qualified will each win a chance to represent the region at the national finals that will be held on the weekend of 24th-25th March.

The boys’ semi-finals will see Juja United from Thika take on Euronuts from Kiambu while Lufa from Laikipia will face Intercity from Kirinyaga.

In the girls’ semi-finals, Limuru Starlets from Kiambu will play Good Girls from Thika while Rwambiti from Kirinyaga will face Express from Laikipia County.

At the national finals , the winning teams will walk away with Sh.1 million each and an opportunity to go for an international training and mentorship camp in London in April 2018.

Speaking ahead of the Central regional finals, Football Kenya Federation president Nick Mwendwa commented that “We had over 200 teams when we began the Central region group stages in January and we’re looking forward to seeing the top sides in action. We will be on ground to scout for talent from the region and see who can be called up for trials for the national teams,”

“We are very proud of the fact that quite a number of players from the Chapa Dimba Na Safaricom tournament have been called up to try out for the National under 20 team. We wish them all the best and look forward to seeing them representing the country at international level”, Sylvia Mulinge, Director - Consumer Business, Safaricom