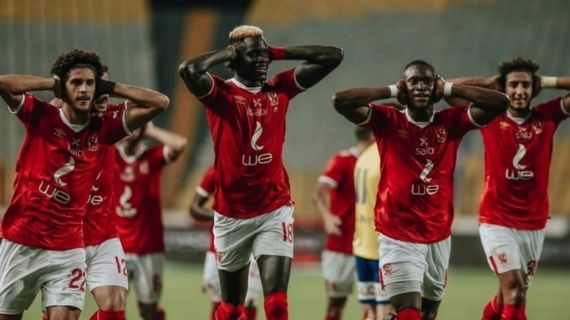 First half goals from Innocent Maela and Goodman Mosele handed Orlando Pirates a vital 2-0 win away against Al Ahli Tripoli in the first leg of their CAF Champions League semi-final fixture in Benghazi on Sunday 8 May 2022.

South African Percy Tau put up an amazing performance, with a brace of assists and goals as defending champions Al Ahly hit Algeria’s ES Setif 4-0 in Cairo on Saturday to put one foot into the final of the CAF Champions League.

Setif had to play 55 minutes of the match with 10 men after Amir Karaoui was sent off following a VAR intervention.

Ahly now carry with them a healthy four-goal advantage heading into the return tie in Algiers next weekend, and the defense of their title seems to be going well on course.

Tau broke the deadlock for the Red Devils on the half hour mark with a bouncing header from close range after Taher’s inviting cross picked out his run.

Setif’s day went from bad to worse five minutes later when Karaoui was sent off for a stamp on Hussein El Shahat. The referee had initially given a yellow but after watching the replay on VAR, he changed the color of the card from yellow to red.

The hosts should have gone 2-0 up just before the break when Taher picked out El Shahat with a good pass on the right, but the latter blasted his shot wide.

They came back off the break with a determined display to put the game beyond doubt and they doubled their tally in the 54th minute when Taher finally found his goal, smashing in a header from a deflected tau cross.

Tau came close to adding another goal in the 56th minute with a brilliant control off a ball lofted behind the defense, but his shot on the volley hit the outside of the bar.

Nonetheless, he created the third goal when he put Mohamed Sheriff through, the Egyptian number 10 chipping over a deft clip over the keeper, barely two minutes after coming on.

Ahly completed the job at the stroke of 90 minutes, Tau adding his second of the evening with a simple tap in from a yard out after Mohamed Hany’s cross from the right found the defense napping.

Wydad Athletic Club took a big step towards the final of the CAF Champions League thanks to a 3-1 victory against Petro Saturday afternoon in Luanda in the first leg of the semi-final.

Tiago Azulao scored to give the Moroccans the lead.

IYahya Jabrane doubled the advantage for Wydad with a powerful shot from outside the box.

Guy Mpenza  scored the third goal for Wydad before Ricardo Job reduced the gap for the Angolans,