Amina receives Caretaker Committee report, to give the way forward on Thursday 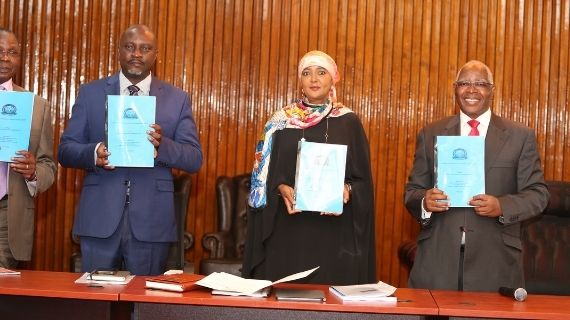 She was speaking at the Moi International Sports Center on Tuesday as she received the final report of the FKF Caretaker Committee from its Chairman, Justice (Rtd) Aaron Ringera.

Sports CS Amina Mohamed has said that the way forward for Kenyan football will be known on Thursday after consultation with President Uhuru Kenyatta and football stakeholders.

She was speaking at the Moi International Sports Center on Tuesday as she received the final report of the FKF Caretaker Committee from its Chairman, Justice (Rtd) Aaron Ringera.

The committee was put in place on 11 November 2021 following the disbandment of the Nick Mwendwa led office following allegations of financial impropriety.

The FKF Caretaker Committee made the following recommendations

a) That the FKF Constitution be amended to comply with the Constitution of Kenya and the Sports Act. The Committee has developed a Draft Constitution annexed to this report which we recommend be shared with FIFA and subject to its concurrence, be subjected to a validation process by members of FKF and adopted by the General Assembly as the amended Constitution of FKF.

d) That the Ministry of Sports, Heritage and Culture adopts the report contained herein on the commercialization of football as a sport including the appointment of a Director of Football who is to be a government employee.

f) That the FKF adopts a more transparent and accountable governance system that involves disclosure of information including its sources of funding (FIFA, donors, Government etc.) to its members and that these funds be utilized for nurturing/development of sports and towards infrastructure development.

g) That the FKF digitalizes its processes by adopting an Enterprise Resource Planning(ERP) system including the appointment of referees, fixtures, training calendars, online ticketing, introduction of artificial intelligence cameras in the football grounds and introduction of analytic experts.

h) That the FKF conducts regular workshops for players, club medics and referees to promote awareness on sports science including nutrition, anti-doping, injuries and treatment as well as endorse the importance of medical insurance for all players.

i) That FKF ensures that all leagues currently being played by men are also introduced for women players. These leagues include NSL and DIV 2. Further that the FKF introduces leagues for under 13, 15 and 17 for both boys and girls in liaison with the Primary and Secondary Schools Sports Association.

j) That the government ensures that all sports facilities that are used for football meet international standards as stipulated by CAF and FIFA.