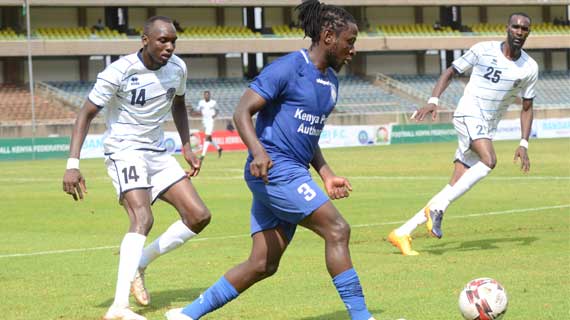 Bandari failed to take advantage of kicking off their campaign at home after being held to a 0-0 draw by Sudan’s Al Ahly Shandy in the first leg of the CAF Confederations Cup preliminary round at Kasarani on Saturday afternoon.

The dockers, playing their second ever continental match failed to spark at home, and will now have to pull their best away from home in two weeks’ time.

They failed to create good chances to score and it was the visitors who had the best. Mohammed Abdallah was put through on goal by Yassir Mozamil, but Bandari keeper Mike Wanyika was quick off his line, throwing himself infront of the striker and blocking the eventual shot.

Sudan had the ball inside the net in the 13th minute when the two combined once again, but Abdallah’s tap in from close range was ruled out for offside.

Bandari had two chances, first Darius Msagha’s header from a Yema Mwama cross cleared off the line by Amgad Ahmed with his keeper off his area. In the 27thminute, the dockers had an even better chance when Abdallah Hassan intercepted a back pass but he collided with the keeper who had come quickly off his line.

William Wadri had the closest chance for the dockers in the 33rd minute when he dived in decently at the edge of the six yard box to meet up with a Mwama cross but his header missed the target by a whisker.

In the second half, the visitors started brighter and came close to breaking the deadlock just a minute in when Mozamil found some shooting space on the right but he blasted his shot wide.  Salaheldin Adil had a great chance to score midway through the half when he was picked out with a cross from the right but his header from close range unmarked went over the bar.

Wycliffe Ochomo, Benjamin Mosha and Shabaan Kenga were brought on to try and stabilize the ship and get a goal. Ochomo had a header go just wide while Kenga’s rasping shot from distance was inches over the target.