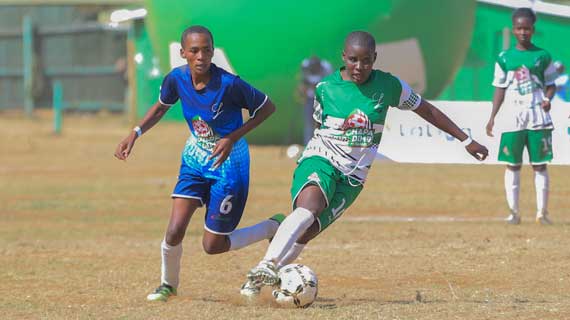 Kajiado’s Al Ahly FC and Kitale Queens are the boys’ and girls’ champions of the Chapa Dimba Na Safaricom Rift Valley Region after winning their respective finals at the Eldoret ASK Showground on Sunday afternoon.

Kitale proved to be better over Nandi’s Itigo Girls hitting them 4-0 with Malondo Agnelita striking a hatrick before Cynthia Libondo sealed the win late in the second half.

“We’ve been working hard for this tournament winning against very tough teams along the way. We work as a team and this has earned us good results. This is the basic reason I became the MVP in the tournament. We look forward to being national champions in June at Kinoru,” said Libondo, Kitale’s skipper who was later named Most Valuable Player.

In the boys’ final, Al Ahly won off a fiercely contested final against Uasin Gishu’s Tumkas FC, bagging the title after winning the penalties 4-1 following a barren stalemate in regulation time.

“The game was very tough as our opponents were equally good. Our win today is great news to the people of Kajiado and we’re very happy. We plan to go back to the drawing board and build our skills as we soldier to the national finals. We are looking forward to great history,” said Hassan Abdirahman, Coach Al-Ahly.

The winners walked home with a cash reward of Sh200,000 each and now join Bishop Njenga Girls and Lugari Blue Saints from Western, Manyatta Boys and Ndhiwa Queens from Nyanza as well as Super Solico and St Mary’s Ndovea from Eastern for the national finals.