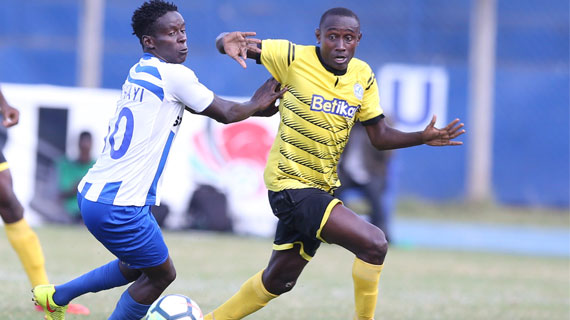 AFC leopards leave it late to beat Sofapaka 1-0 in Machakos as Gor Mahia pick crucial win n Kisumu to go five points clear at the top of the KPL standings.

Elsewhere, Gor Mahia went five points clear at the top of the standings with a 4-0 blanking of Wazito FC in Kisumu.

At the Camp Toyoyo Ground, Kariobangi Sharks continued with their resurgence beating Nzoia Sugar 2-1 to move to seventh in the standings while in Nakuru, Ulinzi Stars had to come from behind to draw 1-1 with Kakamega Homeboyz.

At the Kenyatta Stadium in Machakos, Sofapaka came into the tie with the hunger of picking three points to narrow the gap between them and leaders Gor, but they left dejected after missing several key chances to score.

Stephen Waruru had the first chance in the 10th minute when a cross from Umaru Kasumba found him isolated in the box but his volley went straight to keeper Ezekiel Owade. In the 23rd minute, Waruru was the creator making a good run on the flank before cutting back a cross that was however cleared by Salim Abdallah right infront of Ezekiel Okare who was waiting to pounce.

The game was an evenly contested affair, each of the two sides fighting to break the deadlock. Mohammed Kilume should have done better with a 40th minute opportunity with a shot from range but it went wide.

On the other side some beautiful combination play from AFC saw Jaffery Owiti laid up by Marvin Nabwire at the edge of the box but his shot went over after being closed down by the Sofapaka backline.

In the second half Sofapaka sought to start strongly and Elli Asieche came cross with a shot from inside the six yard box off a corner, but the effort on the volley was blocked by the AFC defense. On the hour mark, Umaru Kassumba had a brilliant chance to break the deadlock after being picked out by Asieche but he could not direct his volley on target.

Aziz Okaka who had just come on for Senaji almost made an immediate impact when a Marita cross from the right found him at the far post, but his header was beautifully saved by keeper Mathias Kigonya.

Sofapaka kept pounding the AFC box but could not execute their chances and they were punished six minutes from time when from a counter attack Marita spotted keeper Kigonya off his line and looped the ball over him.