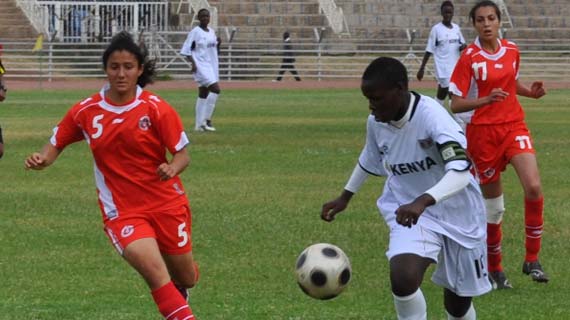 The Kenya national U-20 women’s team  jetted back on Monday morning (6:40am) after honoring their return match against Tunisia in their world cup qualifying match in Tunis.

The team bowed out of the qualifiers after succumbing to a 2-1 return leg defeat thus dropping out on a 4-2 aggregate. They lost the first leg match 1-2 in Nairobi.

Speaking to Michezoafrika.com, team chaperon Rachael Kamweru said the Kenyan girls showed good skill and patriotic spirit that helped in marching their opponent’s team that has 6 professional players who have signed with top clubs in France.

“Our girls are all locally based, in fact some of them are still in high school and do not have any processional skill but were good enough to give strong resistance to a team that is majorly constituted of professional players ,” said Kamweru.

She further urged the Federation to lay down a plan for the girls other than dispersing the team and only rushing to constitute a team when need arises.

“The girls are talented and willing to learn, this is a team that can be nurtured to the senior Harambee starlets’ team, they need to be kept together under constant watch and training for the sake of the future,” she said.

After returning home, the team headed back to their camp in Shauri Moyo as they wait to receive their allowances which the Ministry of Youth Affairs and Sports promised to take care off on behalf of the federation.

Tunisia now progresses to the 4th round of the world cup qualifiers as they anticipate finishing among the top two teams in the CAF region which will automatically qualify for the event.

The 2012 FIFA U-20 Women's World Cup will be held in Japan later in the month of August.