U-20 Starlets fall at home to Tunisia 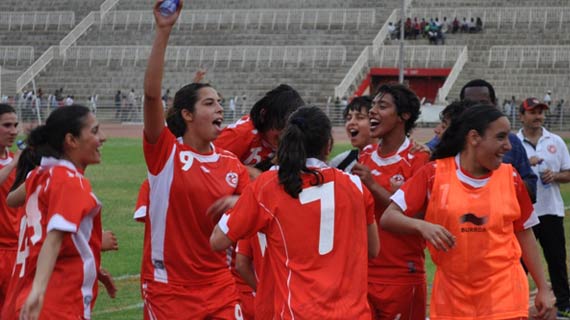 U-20 Starlets fall at home to Tunisia

The national Under 20 Women’s team started their second last phase of qualification to the Women’s world Cup with a 2-1 loss at home to Tunisia.Coupled by pathetic officiating, the girls struggled to find their usual rhythm and fell as early as the seventh minute from the penalty spot after Dhekna Rahfoudh was hacked down inside the box. Ella Kabachi stepped up and converted the penalty.

The Kenyan girls however put up a brave face and struggled to fight on. They constantly knocked on the door of the Tunisians but they never really sounded a reply due to poor ball control and inconsistent possession  that is uncharacteristic of them.

A goalkeeping blunder in the 38th minute gifted Mezier Hourief  the second goal, to further dampen the Kenyan girls’ spirit.

The Tunisians resorted to time wasting tactics falling down and rolling for several minutes whenever the Kenyan team were hot on attack. Dissapointingly all the theatrics passed without a booking as the continually frustrated the Kenyans.

Come the second period, the Kenyan team started pressing hard for a goal to lift their spirits. They seemed to tire off as the game progressed and never really got to test the Tunisian keeper much.

The reprieve came in the 71st minute when the Tunisian keeper failed to hold on to a Sharon Jepkurui shot from the edge of the box.

In the dying minutes of the match, Ellah Kabachi almost scored her second but her free kick from the edge of the box was saved by the Kenyan keeper Pauline Atieno.

Kenya now rests for two weeks before they head to Tunis for the return leg, hoping to overturn the deficit.

A good win for them in Tunis will see them qualify for the last stage where they meet either Ghana or South Africa.

The winner proceeds to the World Cup which will be held in Japan in August.