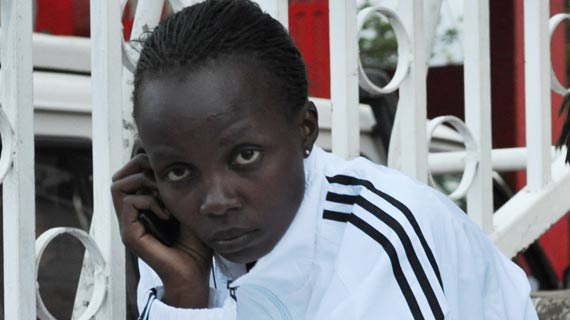 Barely 24 hours after NTV highlighted the plight of the U-20 Starlets, Nairobi town clerk Philip Kisia through the People’s Centre on Saturday reacted swiftly to give the girls a Kshs 50,000 token ahead of their trip to Tunisia on Thursday and also promised to provide all the meals for the team throughout their remaining days in camp.

Kisia was responding to a TV news report that highlighted how the Kenyan Starlets had been left in the cold walking to and from training at the City stadium and struggling to find a decent meal as they prepare for the forthcoming World Cup qualifier return leg match against Tunisia next weekend.

Kisia presented the token to the girls when he hosted the team to an Easter lunch treat at the famous Kosewe Foods at the City Center. During the luncheon attended by all the 22 players, team manager Rachel Kamweru and head coach Florence Adhiambo, the town clerk said he was touched and moved by news that a national team does not have a decent meal as they prepare for a world Cup qualifier.

“This is the face of Kenya, I cannot imagine what I watched on news and what am hearing from the players is what the girls have been going through. I love the work some media houses are doing , by highlighting what the national team is going through, we cannot expect them to perform on empty stomachs. I challenge other Kenyans to follow suite as we seek to help our sports men and women attain their ambitions, “said  Kisia.

Kisia further promised to provide full decent meals to the team during their stay in camp until they depart for Tunisia on Thursday next week for the return leg of the world Cup qualifier.The meals will include  breakfast, lunch and dinner.

He also offered to pay for their transport to the  stadium and back saying that he was more touched that the girls had to use ‘tuk tuk’ to meet him for the lunch date in town.

He sounded confident that the starlets have what it takes to turn tables and beat Tunisia away , since the girls have the potential in them.Kisia promised that for every goal the starlets will score he will give them 10,000 and top up with  Kshs. 100,000 if they beat Tunisia.

Team coach Florence Adhiambo thanked Kisia for the gesture hinting that the girls need such positive motivations to perform well.

“He has lifted our spirits, the girls were demoralized now we will train well as we focus on the crucial match, I believe we can beat Tunisia because we have what it takes,” She said.