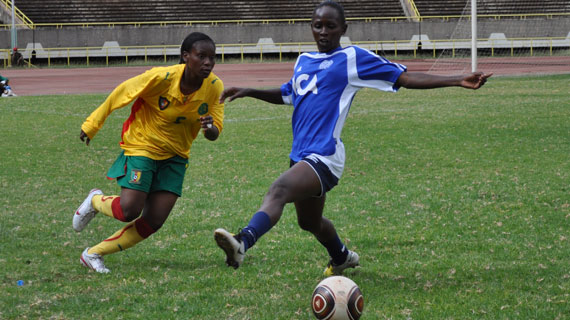 Kenya women footballers are up in arms over what they terms as “unfair treatment” by the Football Kenya Federation (FKF). The players are accusing FKF of discriminating against them when it comes to registering their teams for continental competition despite the availability of abundant talent in the country.

The rant from the women players comes just days after FKF announced that they have withdrawn the U-17 team from taking part in the world Cup qualifiers over what the Federation termed as “failed communication” from their opponents Equatorial Guinea.

Speaking on behalf of women footballers, former international Caroline Ajowi says they demand an explanation from FKF on the real reasons that led to the withdrawal of the team from the world cup qualifiers.

“We demand that FKF gives us a genuine explanation because what we read in the media is simply not making sense to anyone. They claimed that they received late communication from Equatorial Guinea, where on earth do you withdraw a team because of such reasons? The discrimination has to end, for many years we have been taken for granted.” She says.

“If for real they (opponents) did not respond in communication why dint the team travel to the match venue and then demand to be given a walk over? We have read between the lines, FKF should not keep fooling us? We need a clear explanation because the young girls who had worked so hard remain devastated, their ambitions have been crashed.” She adds.

“If for example it was the men national team, will they still withdraw the team because there was late communication?” She quips.

In a letter dated 17th of August 2013, FKF said, “Taking into consideration the late communication by our hosts regarding the actual date of the match, venue and time as well as issuance of entry visas, we are left with no alternative but withdraw our team from the preliminary round of the U-17 2015 women world cup qualifiers.”

However, the women players reveal that FKF did not even attempt to process the players’ passports in time until Friday last week that was meant to be the same day of travel.

The Kenyan U-17 team was training under former international Florence Adhiambo who also recently led the Kenyan U-20 team to an excellent performance in the U-20 world Cup qualifier where they lost in the second round after losing to Tunisia.