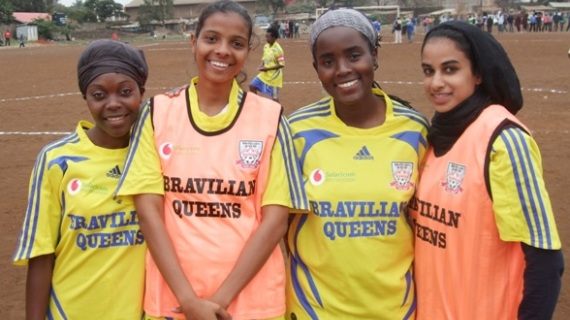 On the hockey pitch,she is known as Jackline Jow Mwangi; the deadly forward who torments opposing defenders  while donning colours of the defending national and Africa hockey champions  Telkom Orange .

Being a household name in the hockey fraternity we sought to find out the other side of the prolific forward who spent over 10 years in the USA studying and playing football.

Jow talked to us about what she does when not playing hockey during weekends. For starters, she is a Physical exercise (PE) teacher at the International school. However most importantly Jackie is the chairperson and coach of the Bravilian Queens (BQA)

So what is BQA?

Bravilian Queens are a self help group registered in November 2008 with the main aim of reaching out to girls from poor families with life skills and other forms of support through football.  Empowering underprivileged teenage girls through building their assets (social, health and economic) integrated within a football program in Nairobi slums is their motto.

According to Jackie, as she is commonly referred to, the program started with a girls team comprising of 25 girls from various slums in Nairobi. Like minded persons like herself reached a Memorandum of Understanding with State House Girls High School who allowed the team to use its sports facilities free of charge.

“I can say we have grown from strength to strength compared to when we first started the initiative,” explains Jackie.

“Since 2010, the program has undergone a major growth in size with a total of 1,000 girls as beneficiaries.  26 teams are participating in the Open Age, Under 16 and Under 12 categories of our successfully established leagues and other integrated empowerment activities in Dagoretti. Inclusion of ten more teams for the Under 10 year olds is under way,” Jackie notes.

To reward the efforts of the queens their main team got promotion to the national girl’s premier league for the 2013 edition after toping the Nairobi county provincial league last year.

“BQA Girls football Team has been promoted to the National Premier League and two other sister teams are participating in the National girls Premier League. Our main catchment is currently largely in the low-income communities within Kawangware slums, Dagoretti District in the west part of Nairobi City and its environs.” adds the 33 year old wife and proud mother of three.

Jow says apart from mentoring the girls in footballing skills, they try to be an all-round group determined to change the face of society.

“We engage young girls in Kawangware slums areas through football, to enable them to mature in body and mind in an honest and peaceful learning environment. Majority of the players attend the local primary and secondary schools. The main constrains facing the majority of players are economic hardships, lack of space and violence associated with slum dwelling as they come from poor families.” She adds.

According to Jackie , Bravilian Queens Association is therefore an avenue for the girls to cultivate discipline, play, share and build self-esteem, while forming a network that offers an alternative social-economic fabric that supports their day to day endeavors, whatever their circumstances.

As  the women premier league is set to kick off this coming weekend one thing is evident though asBQA is yet to find  a sponsor who will  chip in to help in the team’s preparations and participation in Kenya’s top flight women league.

“BQA is currently looking for Sponsors and well wishers to sponsor the BQA Girls football team in the National League and the Under-16, Under-12 & Under-10 girls’ football leagues. Those are some of the biggest challenges and hindrances we do go through day in day out. We have come from far and there is light at the end of the tunnels.