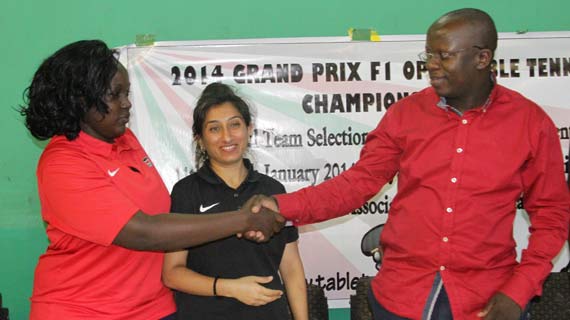 He urged the new team to work hand in hand in their bid  to steer the game of table tennis in Kenya to greater heights.
Mudibo, who served as the Association's longstanding Secretary General, defeated Francis Gichomo 10- 4 in an exercise presided over by KNSC and National Olympic Committee of Kenya.

During the election, Mudibo's line up made a clean sweep of the seats in the executive committee. A total five provinces- Nairobi, Central, Coast, Rift Valley and Nyanza participated in the election.

The Elections were conducted  through a Court Consent order of 22nd November 2013, whereby the Jane Pinto group and Francis Gichomo's group agreed to elections being held on the 25th of January for Branches and the National elections to take place on February 8.

Also elected to the new team was multiple Kenya champion Fahd Daim who won the post of Secretary General and Madhu Gudka who took over the mantle in the treasury's docket.

Madhu replaced Dilshad Kanji who was elected an Ordinary Member for the Council. Mombasa based CTTA Chairman Mariga Mwangi is the new vice chairman.

Thika based John Gicaci, a career accountant, was elected the assistant treasures while former player Paul Mulandi was elected unopposed as Fahd's deputy.