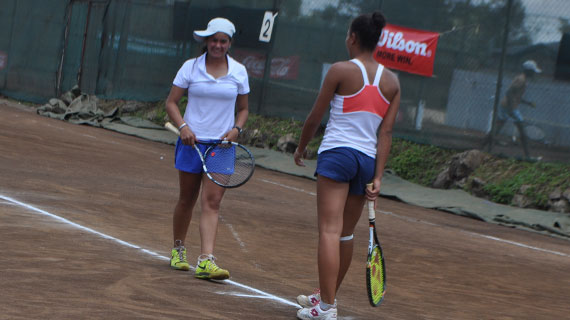 16 year old Sandra Samir who ranked 37th in the world is according to the ITF junior rankings has a   dream of making it to the top crème of Tennis in the world some time soon.

Prior to her Nairobi visit, she took part in the AJC under 18 tournament which was held in South Africa   where she emerged the best.

The Egyptian who is playing in the Murram court for the first time said that the warm up tournament helped her acclimatize with the conditions.

“This is a great opportunity for me to experience different courts.  I am used to clay and hard court, I love the weather in Kenya, it’s cool whereby I use little energy.” She said.

Samir attributes her success to a lot of training both in Egypt and in Europe where she takes part in a number of matches.

“Tennis is all about play and more playing. Unless one has passion for the sport, you can never get good results. I played many matches before today. I will also be taking part in grand slams after the AJC.”

On Kenyans potential, Sandra admitted she has never played against most of them before. She however said there is potential from the manner of spirited performances they exhibit in their matches.

“Apart from Mbaya whom I met in South Africa, I have not had the opportunity to play the others. I have only watched them during my week’s stay in Kenya. Yes despite losing they put in a great show. That is admirable which can take them far.” She concluded.

Samir is a great fan of former Tennis number one Rodger Federer who she simply says makes the sport appear so easy.