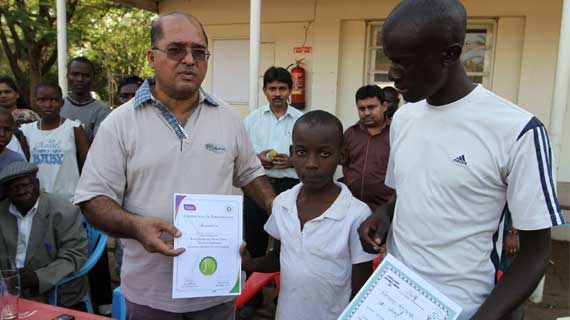 Junior tennis players in the western Kenya region have a reason to smile as a 14 tournaments calendar was unveiled in the lakeside city of Kisumu over the weekend.

The launch which was curtain raised by Amani Junior Tennis Challenge, organized by Victoria Tennis Academy in partnership with Amani Na Upendo Development Group attracted a total of more than 160 players across Kisumu.

Shabbir added that he has set aside a total of Kshs.700,000 for building 2 tennis courts in Kibos School of Excellence which will now be the home ground of the talented tennis players from the fastest growing tennis academy in East Africa,Victoria Tennis Academy.

“We want to make tennis more accessible to the less fortunate kids from the slums and villages in Kisumu and its environs” he added. He further said players from the academy have showed their potential in tennis when they frequently participate in tournaments organized in Nairobi.

During the tournament, Samwel Otieno of Kisumu Boys High School was crowned Boys Under 18 champion after defeating Khalifa Khalid 4-1 to lift the trophy. In semis, Otieno edged out Collins Odhiambo 4-1 as Khalid smashed Abdi Kafar of Kisumu Day 4-1.

In Girls U-18, Lindah Janet crowned the overall champion after she topped the round robin group with 12 points, Fazati Ali taking position 2 with 9 points as Ivy Obare taking 3rd place with 6 points.

In boys Under 16 finals, Aaditya Dahiya defeated Collins Odhiambo 6-2, 6-0 to lift the trophy. On his way to the finals, Dahiya dismissed Wycliff Otieno 4-1 as Odhimabo ridding over Khalifa Khalid 4-0.

Jul 21-22 VTA 10 and Under Tennis Championships-Kisumu