Nikita is back - Continues impressive run 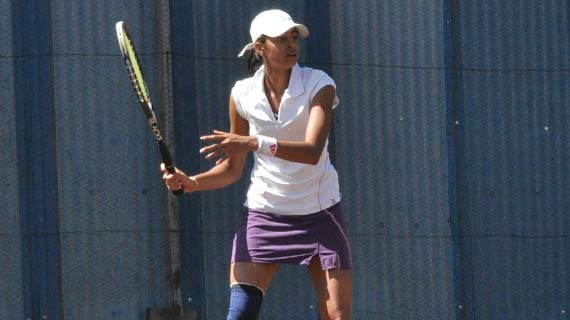 Nikita is back - Continues impressive run

Serbian Ivcovic Iva was the latest causality of the rising star Nikita Nitin Dawda,the Kenyan convincingly beat her by straight sets of 6-3,6-4 to book a quarter final slot in the  first leg of the Nairobi International Junior championship one,  girls singles  to be played on Wednesday.

Nikita, fresh from the East Africa 18 and under juniors’ championship, 2012 circuit where she finished second is more determined to stamp her authority in the juniors category and will not stop at nothing until she reaches her dreams.Nikita lost to Juliana Turosienski of Poland in the singles final of the ITF East African 18 and under junior circuit held in Nairobi last week.

“I play with passion, and not to stretch myself, I know I got the potential and will work to reach my goals”, said the hillcrest student. Nikita is also preparing for the forthcoming Africa Junior championship due in April.

She will meet the winner between Namibian Moolman Carita, who knocked out another Kenyan, Sofiya Gulam in the first round of the competition yesterday and Shakoulina Daria (Russia) who was to play later on Tuesday.

Nikita was not alone this time around as another Kenyan Ishmael Changawa, the SouthAfrica based  who managed straight sets of 6-3,6-2, against Italian Papania Kagiso  in the singles category.

In other matches Abohabaga Sherif of Egypt  beat Kellerman Okkie  of South Africa 6-1,6-3 to book a third round place with Ricciardi Giuseppe of Italy who also came from a set down to knock out Atzinger Joannes (Zambia) with 2-6, 7-5,6-2 set win.

The   first leg of the Nairobi International Junior championship one, continues on Wednesday as it enters the quarterfinal stage.