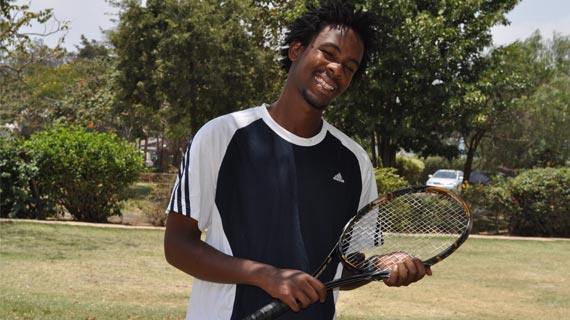 Ugandan Duncan Mugabe had announced his retirement from competitive tennis after losing to Zambia’s Edgar Kazembe in the finals of the 2012 Real Insurance Kenya Open Tennis Championships in Nairobi.

However Mugabe rescinded his decision to retire, and came back stronger to win the 2013 edition defeating Rwanda’s Jean Claud Gasigwa. Mugabe  lost the opening set 6-7  but he recovered in the second and third sets which he easily won 6-3, 6-2 to win the Ksh100,000 prize money at the Nairobi club on Sunday.

Coincidentally the Ugandan had lost to Gasigwa in the Uganda Open held in April. He also defeated Kazembe in the semi finals of this year edition .He was quick to clarify that his was not about vengeance but playing tennis and enjoying the game.

“True I announced my retirement following last year’s defeat. Many believe it was down to the loss. I was going through personal issues which I have put behind me now. I want to carry on playing and achieving my targets.” The 23 year old said.

“I want to surpass the achievements of Uganda's most successful player - the legendary John Oduke. He remains the best and mine may seem like a wild dream. I want to live my dream in the sport.” He said.

“I am a down-to-earth individual characterized by hard work and perseverance and next year I will be back hoping to defend my title.” Mugabe concluded,