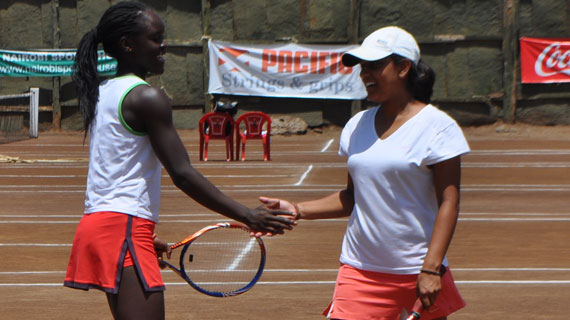 Kenya’s only quarter finals representative  in the just concluded Africa Junior Tennis championship (AJC)  Stephanie Mbaya is not shy of her achievements. The form two students at the Loreto Convent Valley Road believes she has bettered her 1267 world ranking after the tournament.

She lost to finalist Lesedi Jacobs from Namibia in the girls U-16 while Jacobs could not match Africa number one Samir Jacob of Egypt in the finals on Saturday.

“It was such a wonderful outing for me in the two weeks tournament. I have had an opportunity to play with the best in the continent and that is a great achievement. To be honest I have grown as a player.” she said.

“This is the first time such a tournament is being hosted in East Africa since its inception over 30 years ago. On behalf of the Kenyan junior players we are humbled by the experience the championships has brought to us.” She said.

Mbaya has promised to keep working hard to ensure she improves her Africa ranking and world ranking. This she says will come with more exposure championships and adequate training.