Mbaya advances to quarters as other Kenyans are eliminated 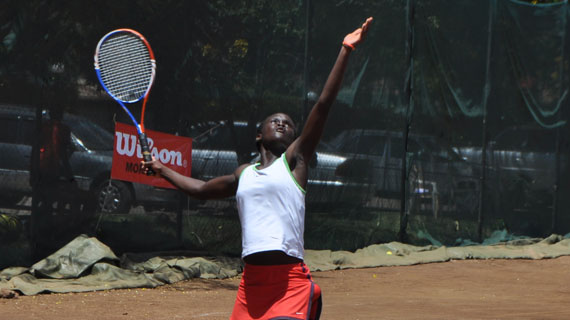 Mbaya advances to quarters as other Kenyans are eliminated

Stephanie Mbaya will be the only Kenyan representative at the ongoing African Junior tennis Championships main tournament after defeating Fransica Nyarko of Ghana on Tuesday at the Nairobi club tennis court.

The 16 year old Kenyan dominated the match winning with easy sets of 6-3, 6-2 in the morning. The Superiority of the North Africa nations was however the highlight as most of the local players were bundled by the experienced opponents.

The second round saw Josphat Garo go down to Abdul Quattara of Ivory Coast 6-0, 6-0. The other Kenyan representative  in the round Sheil Kotecha gave her all however she could not match the experience of Egyptian Omar Elkadi who came out victorious with 6-2, 6-2 on the day to advance to the quarters.

Mbaya showed her gratitude after advancing to the quarters saying she learnt a lot during the warm up matches last week therefore need to give her all in the quarters.

“In the warm up match I lost to Lina Quostal of Morocco in the quarters. She went all the way to the finals. I want to give my all in the main cup. I have had it relatively easier so far. Being the only Kenyan in the singles quarters I am pressured to produce the best.”  She noted.

“I went to the AJC under 18 in South Africa early this year and the competition there was very stiff; it was also a learning experience for me. As for tomorrow’s match I am ready for anything.”

Coach Evelyne Otula said all is not lost for the Kenyans who were eliminated as they will still be competing for positions and marks in the tournament.

“The championships are still going on. The ones who lost will be in action for the whole week. Players will be fighting for marks and positions    which will come in handy while ranking the participating teams.” She said.