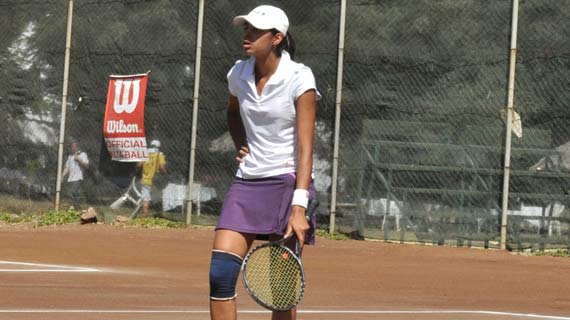 Kenya’s hopes of lifting the singles of the ITF East African 18 and under junior circuit were dealt a major blow when the impressive Nikita Dawdaw lost in the singles final to Juliana Turosienski of Poland in an entertaining clash early Saturday morning in Nairobi.

Nikita had not lost a match through the 6 day tournament and many were hoping that this may be the time Kenya could win the title.

The match that lasted 2hours and 25minutes saw the polish top seed took the control of the encounter at the second set after the Kenyan second seed made some tactical mistakes. It ended 7-5,6-1 sets to end the youngsters hopes.

“She was aggressive from the word go, I tried to calm down the match in the first set and it almost paid off, the mistakes I made in the second set were costly, but generally she was good all round and credit goes to her, “ Said Nikita

The tournament which attracted 29 countries with over 100 participants from around the globe came to an end on Saturday evening with word of praise from the chair Mrs. Paurvi Rawal who thanked all those who honored the tournament and promised more things to come,

“I am impressed with the turnout, it has been a good one, given that this is January, we look forward to having much improved tournaments in future, I wish to thank Nikita, she has done the country proud.” she said

After the conclusion of the tournament most participants have confirmed that they will be taking part in the 1st and 2nd leg which will commence on Monday at the Nairobi club.