Kenya's Nikita and Changawa bundled out 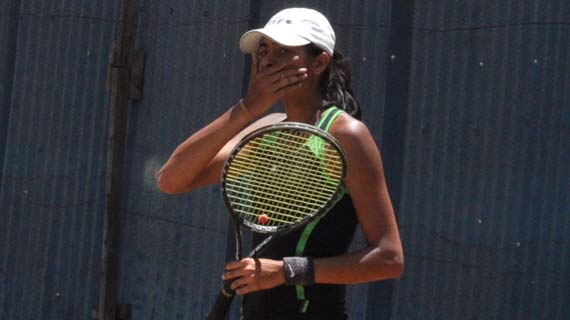 Kenya's Nikita and Changawa bundled out

After approximately 4 hours of thrilling  tennis from a dazzling pair, ITF East Africa 18 and under juniors championship, 2012 circuit Silver medalist, Nikita Dawda was bundled out of the Nairobi International junior championship 1 by  Namibian Moolman Carita, in sets of 7-6,3-6,6,3 to deny the Kenyan a semi final match.

The match was marked by controversies as the court was not marked properly leading to some debatable decisions from both sides.

The Namibian narrowly won the first set and Nikita capitalized on her serving to win the second one. The match had to be decided by a tie breaker when the girl from Namibia out powered the Kenyan to book a semi final slot.

Nikita who sounded disappointed could only manage a dejected comment saying,
“I have never had a match like these one, she was resilient, she made minimal mistakes and also learned my game. It was tiring, four hours of tennis is tough, I am disappointed but I will stand up and come back stronger” she said

In other matches, Kenya’s Ishmael Changawa was also bundled out of the competition by third seed Pervolarakis Micahil of Poland in three sets of 4-6,7-5,7,6 in another entertaining match played early Wednesday morning.

“I was playing a better opponent, he came out guns blazing. I managed to take the first set, but he I failed to match him in the end, but it was a good match” he said

In other matches Abohabaga Sherif (Egypt)  beat   Ricciardi Giuseppe of Italy in sets of 6-3,3-6,6-4 to book a quarter final clash with fifth seed Turosienski Julian of Poland who also beat seed 13,Van Der Burgh,(South Africa ) in sets of 6-2,0-6,6-4 in the third round clash.

In the doubles, Amadi Kagoma of Burundi partnering with Joshua Luck of South Africa beat  Israel’s duo of Yuval Barak and Aviv Darmon in clear sets of 6-2, 7-6, to book a quarter final  slot to be played on Thursday